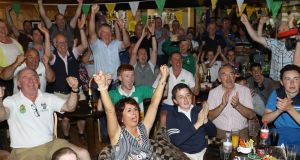 The Offaly Faithful were glued to the televisions in the clubhouse as their hero closed in on the British Open.

Esker Hills in Tullamore, where Shane Lowry learned the skills of the game as a schoolchild, was designed by Christy O’Connor jnr and from the comfort of his heavenly 19th hole, he was surely smiling as a son of the course lifted the Claret Jug.

But at the bar on a very wet Sunday evening, the locals knew exactly where it had all come from.

“Good man Brendan!” they shouted as the Sky Sports coverage briefly cut to Shane’s father after the 32-year-old golfer had played yet another perfect shot from a bunker on the 13th in Royal Portrush in Co Antrim.

Brendan, a forward on the Offaly 1982 team which ended Kerry’s five-in-a-row All-Ireland bid in the Croke Park rain of a Sunday afternoon, is an integral member of the Esker Hills Club, overseeing its junior section.

Of course, Shane is synonymous with Esker Hills too, and for the third time in 10 years, all the local roads near Tullamore brought fans of the Major contender together in hope and anticipation.

In 2009, when Lowry was an amateur winning the Irish Open in Baltray in Co Louth, “the place was packed here all weekend, day and night”, says one of the Esker Hills founders, Joe Molloy, remembering the weather “was brutal too”.

In 2016, Lowry followers converged on the clubhouse again to watch him play the US Open in Oakmount, a Major bid which ultimately ended in failure.

“The US Open took a little bit of the sting out of it but to get to the final stages of a Major was still a great thing,” says Molloy.

So many made the journey to Portrush this weekend that the main bar in Esker Hills was comfortably crowded rather than creaking, with a smattering of international media valiantly trying to negotiate the local geography of Clara, Offaly and the Irish midlands.

Sean Martin, recording the event for the US PGA Tour digital team, was schooled in the Ice Age formation of the course.

“What is an esker?” he would ask, as locals attempted to explain why Lowry, a golf scholar in the supposedly flat and boggy Offaly landscape, came to be such an expert in undulating links play.

But Andy Hoctor, one of the local members watching closely all afternoon, reckoned Esker Hills’ neighbouring course, Tullamore, might have played a role too in making the man a Major contender.

Tullamore’s parkland setting allowed Lowry hone the art of longer, flatter play, said Hoctor, who like so many Esker Hills’ members, is a keen GAA fan, and an All-Ireland minor hurling winner in 1989.

“You have two different courses here. Tullamore would be a little bit longer on the back nine so you have to have length in Tullamore, and a good game, whereas here you don’t have to be that long, but you have to be accurate,” he said.

“It was a combination of both. In Tullamore it gets long on the 13th and 14th whereas here you have to take your medicine. The greens here need a little bit more reading, the ball could go anywhere,” he added.

“It’s all about the pitching.”

From the pitch and putt course in Clara to Esker Hills, just off the road to Tullamore a few miles away, it seemed Shane Lowry always had a club in his hand.

“It’s winding down now and he’s looking good,” remarked the club manager, Ray Molloy, as the holes rolled by. “Every shot he takes gets a cheer and there might be a cheer if it’s a hard luck story for the opposition.”

At the same time, Lowry’s success may have been written in the stars. Ray Molloy points out that course designer Christy O’Connor jnr won the British Masters for Over 50s twice in Portrush. “And Shane won the Irish Amateur in Portrush,” he added.

So those rooting for him in Esker Hills struck a relaxed note as the momentum towards the Claret Jug built.

Cries of “Ole, ole, ole” rent the air on the back nine, soon to be replaced by a rendition of the Faithful County’s unofficial anthem, the Offaly Rover, with its references to Ferbane, birthplace of Brendan, and Clara, the new golf central.

When the final putt sank the room erupted. All hailed Shane Lowry, another Offaly sporting hero for the ages.