Shane Lowry stands on the brink of history at Portrush 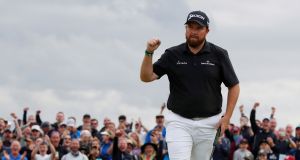 Electric currents charged through untypically still air, with barely a breath of wind, and Shane Lowry - displaying an outward calm that conveyed his maturity - was like a one-man conductor, energised to the extent that the 32-year-old Offalyman powered his way into the outright lead at this 148th British Open championship on the Dunluce links.

In this land of myths and legends, a course record third round of 63, for a record low 54 holes total of 197, 16-under-par, enabled Lowry to take a giant leap towards fulfilling his destiny some 10 years on from what he burst on the scene as an amateur winning the Irish Open.

Lowry, playing beautifully and with a smile throughout as if it provided an added layer of protection to the deeds of others, kept destiny in his own hands with a bogey-free round that took him four strokes ahead of his closest pursuer Tommy Fleetwood, with third placed JB Holmes two shots further adrift.

On one of those days where it seemed the wind was mysteriously sucked into another sphere, so that flags barely fluttered, Lowry played impeccably as he took those strides towards a maiden Major title. “It virtually had no real protection out there. If you were hitting decent shots you were getting good results,” admitted Lowry.

A round of eight birdies gave rise to roars which resonated around the course. “I just wanted to hole every putt so that I could hear those roars,” said Lowry. Nobody could be left in any doubt as to who was the orchestrator calling the tunes, as he kept the ball on a string and, only occasionally, did it misbehave.

One of those occasions was a pulled tee-shot on the Par 4 10th; and, in truth, it only served to provide the catalyst for a dominance of the homeward journey. On that hole, his ball barely visible in rough on a mound, with a stance that had it well below his feet, he contrived to play a low left-to-right shaped shot with a 7-iron that entered the narrow corridor of sand hills protecting the green and finished six feet from the flag. He sank the birdie putt and moved into the outright lead on 12 under at that point.

What followed was a display of brilliance, one of the great rounds in Open history. Lowry embellished the round with a hat-trick of birdies from the 15th, each one widening the gap on those in pursuit. On the 16th, that hole known as Calamity Corner, he played a faded tee-shot with a 4-iron that worked its way through the air to finish six feet from the flag. “I thought it was even closer,” he admitted. It was close enough, and he rolled in the putt. And, again, on the 17th, after a huge drive, he pitched and putted for another birdie.

On the 18th, an approach to 18 feet gave him the opportunity to sign for a Major-equalling round of 62, but the birdie putt - perfectly paced - stubbornly hung on the edge of the cup.

Once before, in the 2016 US Open at Oakmont, Lowry held a four stroke lead going into the final round only to be usurped by Dustin Johnson. But he’s a different player, a different person these days. More battled hardened, yet playing with a freewheeling zest that shows a comfort in his skin that only maturity can bring.

“I think I learned a few things that day about playing in the final round of a major with a lead, that you need to just hang in until the very last minute. You never know what can happen. And I’m going to do the same tomorrow. (Oakmont), that’s a long time ago. I feel like I’m a different person. I don’t think I’m a much different golfer, but I feel like I’m a different person now. I think that’s what will help me,” said Lowry, who admitted his coach Neil Manchip and caddie Brian “Bo” Martin have been hugely influential in his development.

“I’m in a good position and I just have to do what I’ve been doing all year and hit the reset button tonight and go out there and shoot as good a score as I can,” said Lowry.

Poor JB Holmes - who’d started superbly - could hardly buy a putt, until the 18th where he resignedly signalled to the gods that his putter had finally warmed up. The birdie ensured that Holmes, shooting a 69 for 203, would be paired with Brooks Koepka in the penultimate pairing of a final round that has been brought forward due to a forecast weather front coming off the north Atlantic.

Of the atmosphere and the prospect of being in the final pair off for the final round with Lowry (1.47pm tee time), Fleetwood said: “I think it’s amazing for the sport. I think the tournament has done itself proud today. They’ve shown how great the game is and how good it is to watch. The atmosphere for us as golfers was just great. I loved it.

.@ShaneLowryGolf is -8 for his round, a birdie on the last will equal the record low round in Open history of 62 #TheOpen pic.twitter.com/0jRpLXDRZr

"For or against you, you can’t help but appreciate and love what today was and what tomorrow is going to be. (Sunday) is not going to be any quieter. And for sure playing with Shane, last day, it’s going to be more challenging to control yourself in the atmosphere and being in the middle of that. But that’s what we’re here for.”

It’s going to be epic!