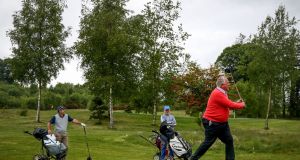 An observation. The kids are partying in the streets, while the old farts do whatever they are told. Go home. Close the door. Don’t move. Learn to lip-read – it’s the only way through a window. Oh, yes, try to stay healthy. Good lad. (Virtual pat on the head.) Yes, it’s been a slow few months.

Social media has been getting far too much attention. But there was an interesting line on it recently. Can’t remember where it was. The head is so addled from breathing its own rank air, it’s the memory now that takes a walk while the rest stays at home.

Locals in a town outside Dublin, it explained, were drawn to taking exercise around the area inside a 5km radius. The sweeping plains of the golf club were their destination of choice.

Many of the people walking belonged to the local GAA, tennis and football clubs. But those clubs were closed. So, what could they do? Walk, of course.

But not along the narrow roads or lapping the housing estates. Why would they with a pristine golf course sitting there with a long face, pin-free and feeling sorry for itself, the pale legs of the shorts-wearing winter walkers in the thin sun a particular bleached shade of white only found on out-of-bounds posts.

The golf club, like the GAA club, the tennis club and soccer club, was technically closed too. Yet walking the perimeter, the fairways and the rough isn’t playing golf, that is, well, it’s walking. As long as nobody is swinging a golf club at a white ball and screaming bollix at regular intervals, it obviously can’t be golf.

Now, you may be male or female, pale or stale or all four, but you still have a heartbeat. While you can, without herniating, carry the golf cart battery from the garage to the car and hold the club steady, then why not hold an opinion too. Something mild like a sand trap is not the enemy of the people.

Maybe take a leaf out of the “Covid Court” crew in Limerick, swallow an aspirin, chuck in a blood pressure pill and tell the Government to damn their optics, feck their ill-founded logic.

Explain to Minister of State for Sport Jack Chambers that a hybrid is not a Covid variation.

Send your snaps to Leo of Seapoint at the Martello tower or Sandycove when the Dublin sun shines. Invite him to join the murmuration of cherry-cheeked lovelies partaking of a chilly dip and sipping coffee in reusable cups and eating homemade biscuits and catching up on pandemic news.

Then remind him that you cannot, must not, in any way, shape or form and under the threat of a large fine and imprisonment gather for a three-ball.

A mental run-through would go something like “Jeez lads, I got nine holes in but I was hit on the way there for 100 lids for travelling without a reasonable excuse. Then coming home some whippersnapper threatened me with a summons. She said six months in prison, a two and half grand fine or a combination of both.”

In Scotland they player a canny game. In Scotland golf is classed as an example of a “reasonable excuse to go out”.

A Scottish Golf statement, issued on February 24th, said: “Following the First Minister’s latest update on Covid-19 restrictions, please note that there is no change to the current position for golf. This means golf courses can remain open for play with a maximum of two players from up to two households.

“Outdoor coaching will be restricted to two people (including the coach) for those 12 years or over. Under 12s do not count towards the number so a coach can take larger groups of up to 30 U12s. Golfers must stay close to home, travel only for essential purposes (which includes golf as part of the permitted exercise activities) and in line with the new legislation.”

The optics for golf courses opening when others are closed, that’s the problem. It’s the contrast with the public pitches for soccer, GAA and other sports around the country staying closed. The political optics are the “posh” golf clubs opening for their high-end subscription-paying patrons when disadvantaged areas remain in lockdown. Not a fair look.

So then, what’s needed is to swing into golf action, rotating the hips on impact, a grey revolution, a march on Government Buildings. Dart station Westland row. Remember the travel pass. Do whatever. Protest. Playing golf is staying healthy.

With priority vaxing in full swing there’s definitely a momentum advantage. But not for long. No need to go totally Grafton Street wing-nut on it. But there’s an epidemiological struggle in the brewing.

Golfgate is in the rear-view mirror. Big Phil Hogan is too. Clifden, look what you spawned.

Proud golfers stand back and stand by.