In distancing himself from Donald Trump, McIlroy makes himself an outlier on the PGA Tour 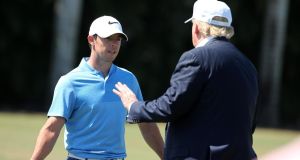 Fourteen years ago Ireland staged the Ryder Cup in The K Club in Kildare. For the home crowd the European team was heavy with familiar content in Pádraig Harrington, Paul McGinley and Darren Clarke.

But the not to be missed player to follow inside the ropes was not Irish. It was average Ryder Cup player and world superstar Tiger Woods and a chance to watch his competitive face twitch, his movements, his athleticism, his swing, his spitting, his disgust and joy from a few metres away.

Picked with Jim Furyk to face Clarke and Lee Westwood in Saturday’s fourball morning pairings, Tiger’s then Swedish wife Elin Nordegren and a female companion, followed the group for the front nine.

It was chilly and wet and there were a lot of golfers fussing over lies and water entry points. Inevitably a conversation was struck up with a colleague from the USA in the leisurely stroll a few paces behind Nordegren and her companion.

He noted the good spirits of the home crowd who lined the course, especially when the ropes narrowed from green to tee for the narrow walk through a corridor of bodies four or five deep. He added how strong a character Tiger’s wife has had to become since she started following him on the golf course.

Why was that, he was asked. The abuse she has received at some of the PGA Tour events over in the US, he replied. What sort of abuse, he was asked. Well, he said, in some of the southern states (he didn’t name them), if you are out on the course and close to where Elin is following Tiger’s group you can hear the fans racially taunting her with ‘N***er lover. N***er lover’.

Cut to August 2018 with Tiger playing in the PGA Tour’s Northern Trust event with US president Donald Trump following the final round. After it, Woods is asked by a New York Times reporter whether his relationship with Trump was an implicit endorsement of his policies towards immigrants and people of colour.

“He’s the president of the United States of America. You have to respect the office,” said Tiger. The question was followed up with another asking for a comment on the state of race relations in the US.

In all Woods was asked three questions about Trump, race relations and immigration and answered all of them in no more than 71 words.

It could have been a transformative experience yet Woods, as he always does, remained unengaged. He reads the US golf scene perfectly. He was comfortable.

Unlike Michael Jordan, who left the basketball world with the pithy rejoinder ‘Republicans buy sneakers too’ when he declined to endorse a black candidate running against an overt white racist in his own state of North Carolina, Woods defaults to omerta.

It’s not easy. Last week Rory McIlroy understood that as a constant stream of abuse flowed from social media after airing views on Covid-19 and Trump.

“We’re in the midst of something that’s pretty serious right now,” said McIlroy. “The fact that he’s trying to politicise it and make it a campaign rally and say we [USA] administer the most tests in the world like it is a contest, there’s some stuff that just is terrible. It’s not the way a leader should act.”

He said he had turned down other offers to play with Trump and when asked would he play again said. “I probably wouldn’t – no.”

McIlroy has taken a few baton rounds before for Caroline Wozniacki, for Zica virus in Rio and in the past accepting to play golf with this president. He understands his world number one status means either way he gets both barrels. Play or not play. His only choice is for which issue he should take the pain .

Where Tiger has never been anything but blue chip and bland, McIlroy has over recent years matured in front of the world’s cameras and become more certain of where he stands. With that he has betrayed signs of having a social conscience. He also passed this year on the lavishly moneyed Saudi event in King Abdullah Economic City. It reportedly cost him $2.5 million.

“One hundred per cent, there’s a morality to it as well ,” said McIlroy of his decision.

In his breaking with Trump’s ideology of devotion and loyalty, McIlroy reminds of the US team of 1993. Prior to travelling to the Belfry, the US players famously groused about a White House meeting with Democrat president Bill Clinton.

Paul Azinger, that year’s PGA Champion, didn’t want to go. According to his friend, the late Payne Stewart, Azinger’s father fought in Vietnam and “he doesn’t want to shake hands with a draft dodger”.

A Golf World article in August of that year said “most [of the team] would just as soon pass.”

Not such a difficult call from inside the walls of golf’s GOP bastion. The 1993 US team were conformists to the PGA Tour norm and not an outlier like McIlroy. Nor was Clinton famously vindictive as president.

The off course positions McIlroy has adopted have begun to reflect an understanding of the power he holds as the best golfer in the world as well as a responsibility to use his power with a conscience.

Married to an American woman Erica Stoll and living in the same Florida state as Trump’s plush Mar-a-Lago bolthole, McIlroy might stand alone on the wrong side of the US golfing world as arch critic of White House management. The payoff for the golfer from Co Down is he may in time find he stands on the right side of history.