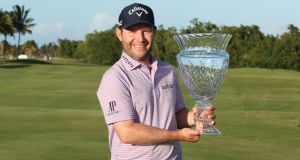 It may not count as the biggest win – financially – of his career, but Branden Grace’s win in the Puerto Rico Open certainly counted as the most emotional . . . on two fronts.

The South African’s win came less than two months after his father, Peter, died from Covid-19; and it also ensured he regained his full PGA Tour playing rights, having been forced to play with a limited card after a fall-off in form these past couple of seasons.

“It was an emotional day. I thought about him a hell of a lot and especially the last tee shot. I was really struggling the last hole, because I knew he was looking over me. I knew he was guiding me. And I know he is in a better place now, but we miss him dearly. It’s been a great way to [end] a tough time that we have had the last couple of months.”

Grace – a past winner of the Nedbank Challenge and once ranked inside the top-15 in the world rankings – earned a two-year PGA Tour card exemption with the win in the Caribbean and jumped from 147th to 83rd in the updated world rankings.

Lawlor walks on for Crumlin

With golf courses currently closed, Brendan Lawlor – ranked fourth in the world disability rankings – is setting out to leave his footprint in another way . . . by walking 10km a day for 10 days to raise money for Children’s Health Ireland at Crumlin Hospital.

Planning to complete the task on his 24th birthday on March 13th, Lawlor – who made his debut on the European Tour last year when playing on a sponsor’s invitation to the ISPS Handa UK Championship at The Belfry – was born with Ellis-van Creveld syndrome, a bone growth disorder that lead to shorter limbs, and spent much of his early years under the care of Crumlin Children’s Hospital.

“I’ve had an incredible journey over the last few years in golf but if it wasn’t for the amazing staff at Crumlin I wouldn’t be here at all,” said the Dundalk golfer who is asking people to join him on the 10-day virtual walk – March 1st to 10th – or to contribute on his fundraising page.

I’ve never thought about putting or golf this much in my life, because it felt so good. It just felt so different on how I was putting that I knew I was heading down the right path” - New world number four Collin Morikawa on recently adopting the Mark O’Meara “saw” technique in putting, which led to a quick dividend in his commanding win in the WGC-Workday Championship at The Concession Club.

How tough a course is Bay Hill? Well, last year’s edition of the Arnold Palmer Invitational saw an average score of 74.11 (to a par of 72) with the field hitting just 50.5 per cent of greens in regulation through the week. Tyrrell Hatton, who made a breakthrough PGA Tour at the venue last year, is the defending champion for this week’s tournament.

“T16 to open the season @GainbridgeLPGA Irons are dialed in and just waiting for the putting to heat up Big thank you to everyone @LakeNonaGCC, couldn’t have asked for a better venue and the course was immaculate!!” – Leona Maguire on opening her season’s work with a tied-16th finish in Orlando (putting her 28th on the LPGA Tour order of merit).

“Proud of myself to fight back after being +4 thru 14 on Thursday. Game is finally starting to feel a little better. Congrats to @collin_morikawa on another W, so impressive. Was glad I was able to rock red and black for @tigerwoods. Glad to hear he’s doing well all things considered and he knows the entire golfing world is thinking of him and praying for a speedy recovery” – Justin Thomas, who has opted to take a week’s break from Bay Hill and is set to return at next week’s Players championship.

“It is hard to explain how touching today was when I turned on the tv and saw all the red shirts. To every golfer and every fan, you are truly helping me get through this tough time” – Tiger Woods, recovering in hospital following surgery to the leg and ankle injuries sustained in a car crash last week.

Tiger Woods was the poster boy and damn near invincible, only for Billy Mayfair – a 31-year-old fighting to escape a slump on tour – to outduel him in a playoff at the Nissan Open, which was played at Valencia, north of Los Angeles, rather than its traditional home at Riviera.

Mayfair led through the midpoint but lost his lead heading into the final round to Tommy Armour.

Armour, though, faded on the final day and ultimately Mayfair’s four-foot birdie putt on the last for a 67 enabled him to join Woods – who’d shot 66 – on 12-under-par 272 and force a playoff. At the first hole of sudden death, Woods pushed his drive into the gallery and could only get his recovery some 40 yards short of the green. Mayfair hit his wedge approach in close, and won out after Woods’s 18-footer for par slipped by the hole.

“The biggest thing now is, I know I can win again,” said Mayfair, who had been without a tour win since 1995. “When you go for a while without winning, you say, ‘Boy, am I ever going to win again?’ Tiger’s a great player. I knew he’d be there at the end of the day. I was just hoping I’d be there too.”

Q
If, in the course of a round, a player gets a sudden illness or injury (such as being struck by a golf ball, a bee sting or heat exhaustion), what is considered a reasonable time for recovery?

A
Such situations are covered under Rule 5.6a/2, which allows that a player be given up to 15 minutes to recover before the player’s failure to continue play would be considered unreasonably delaying play. The rules provide that the committee (organising the tournament) also normally apply this same time limit to the total time a player uses when they receive repeated treatments during a round to alleviate an injury.

Lions squad set to have a greater spread than four years ago 22:00
Warren Gatland hopeful that Lions itinerary will be finalised this week 22:00
Blackmore back among the winners at Fairyhouse 21:32
Elite athletes still required to undergo 10-day mandatory quarantine 20:32
Klopp says Liverpool need ‘perfect performance’ to overcome Real deficit 20:00
Here is your handy guide to sport on television this week