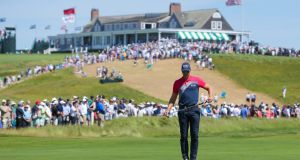 Henrik Stenson: described Shinnecock Hills as “silly, it’s like glass around the hole and it’s not a smooth surface either . . . . they never fail to fail, they lost this golf course.” Photograph: Brad Penner/USA TODAY Sports

The water hoses were out on Saturday evening but it was too late, the damage was already done.

Improbable as it seemed, the USGA somehow managed to climb onto a slippery slope and to allow the course at Shinnecock Hills in this 118th edition of the US Open championship to slide over the edge; a number of greens were lost, the situation only made worse by some of the pin placements.

When Mike Davis, the chief executive of the USGA, became a defender of the indefensible, it was always a losing cause.

“There were some aspects of the set-up that went too far . . . . well-executed shots were not only not rewarded, they were penalised,” he conceded, but only after players – frustrated, exasperated and even angry – vented their feelings on a third round where, as the day progressed, it proved impossible to hold greens and difficult for players to control the pace of putts.

It was akin to asking players to hit approach shots to land on a trampoline, or placing a golf ball on the bonnet of a car and asking someone to putt . . . . and keep the ball on the metal!

Zach Johnson claimed the course had gone over the edge. Henrik Stenson described it as “silly, it’s like glass around the hole and it’s not a smooth surface either . . . . they never fail to fail, they lost this golf course.”

Rafa Cabrera Bello talked of the “unnecessary pin positions, they [the USGA] found a way to make us look like fools on the course”.

History had forewarned of the need to proceed with care. In the final round of the 2004 US Open, a miscalculation about the strength of the wind (which dried out the course) saw a number of greens – most notably the seventh, where players putted off greens into bunkers – lost to the extent that watering of the greens between groups was implemented.

And in the run-up to the championship last week, reasons were offered as to why such a situation would never, ever happen again. Technology and data had moved on. Drones could be flown to use camera to identity possible issues on putting surfaces. The technology included advances such as on-site weather monitoring, soil moisture metres and a device to measure the firmness of putting surfaces. Old-fashioned common sense wasn’t mentioned, but that is what was needed most.

The USGA like to see the US Open as the ultimate examination of players, on tour and especially in the Majors, but the comparative easy set-up of last year’s event at Erin Hills (when the expected wind stayed away to make for a birdie fest) was most likely in the back of minds this time in ensuring that the old mantra would return.

In Thursday’s first round, the USGA admittedly took heed of a meteorological warning of strong winds and adjusted a number of flag positions on the greens. It still proved to be a brutally tough test, but there was no question that a line had been crossed on fairness.

In Saturday’s third round, though, that line was crossed and especially so on the 13th, 15th and 18th greens. Ironically, the seventh, the source of all the controversy in 2004, remained immune from any finger-pointing.

That the USGA were again forced into defensive mode to explain how they’d lost the course – again – said it all, really. It won’t happen at Pebble Beach next year because that iconic course on the Pacific doesn’t need to be tricked up in any shape or form.

But, then, neither did Shinnecock Hills: this equally iconic course on Long Island is a design masterpiece that didn’t need to flags to be tucked away in corners on the edge of greens, or for those putting surfaces to be parched so that the predominant colouring was brown, dried-out grass.

A course which should have been a winner was again – just like what happened in 2004 – left with scar tissue after playing host to the championship. Not so much a case of déjà vu as a case of failing to learn from mistakes of the past.