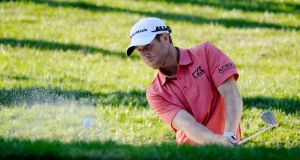 Tyler Duncan plays his shot out of a bunker on the 17th during the third round of the Safeway Open at the North Course of the Silverado Resort and Spa in Napa, California. Photograph: Robert Laberge/Getty Images

Tyler Duncan held on to his one-shot lead at the Safeway Open on Saturday after carding a one-under-par 71 at the North Course at Silverado Resort and Spa in Napa, California.

Duncan, playing in just his second PGA Tour start, moved to 14 under and will start the final round with a slender lead over Chesson Hadley, who shot a two-under 70 a day after dazzling with a 61.

“I didn’t hit it the best. I made some saves on the back [nine] that really held the round together,”said Duncan, who had to make a nervy par putt on the final hole of his round.

“I’m just looking forward to the opportunity to be there to play on Sunday and I’m going to come out and give it my best.”

Hadley was happy to be in contention despite not being able to match his great Friday performance.

“I’m not hitting it perfectly straight right now but finding a way to get the job done right now,” he said.

“I’m proud of the way I played today. It’s about being in the hunt for tomorrow, and that’s where we are.”

The big mover of the day was Bud Cauley whose 66 got him into contention on 12 under alongside defending champion Brendan Steele. Emiliano Grillo of Argentina and Graham DeLaet of Canada are at 11 under.

Phil Mickelson shot a four-under-par 68 to reach 10-under and give himself a chance on Sunday. He had a string of four straight birdies from the fourth through seventh holes and finished with seven birdies to go along with three bogeys.

Burnley hold out Crystal Palace for first win of the season 19:40
Giroud remains part of Chelsea plans, says Lampard 18:25
Crowds of 4,000 to return to sporting events in England from next week 17:32
Former Ireland assistant manager Maurice Setters has died aged 83 17:06
Davy Russell on neck injury: ‘it was a very close one and I dodged a bullet’ 17:00
Here is your handy guide to sport on television this week