Paul Dunne battles to stay in contention at Dunhill Links

Meanwhile, a Rory McIlroy birdie-blitz meant he made the cut right on the mark 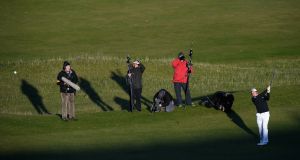 Paul Dunne plays his approach to the ninth at Kingsbarns on day three of the Alfred Dunhill Links Championship in Scotland. Photo: Getty Images

Ireland’s Paul Dunne is in contention once again going into the final round at the Dunhill Links Championship in Scotland, although he will have his work cut out to catch runaway leader Tyrrell Hatton.

The Greystones man captured his first European Tour title at the British Masters last week and will play in the second last group in Sunday’s final round alongside Luke Donald after he carded a two under par round of 70 at Kingsbarns to take sole possession of third place at 11 under.

At the top of the leaderboard Hatton is well placed to defend the title he won last year after a stunning 65 at Kingsbarns got him to 18 under and five clear of nearest challenger Gregory Bourdy.

Dunne got off to the perfect start with a birdie at his first hole – the 10th – but he gave it back four holes later. Turning at level par he was struggling to pick up any momentum but birdies at the third and the sixth – the latter set up by a magnificent flop shot after almost driving the green – were enough to complete a round of 70 and ensure that he is, at least, well placed to pick up another big pay cheque and possibly even make a tilt at the title if Hatton slips up on Sunday.

Four shots behind Dunne at seven under is Shane Lowry who will be ruing his second round 75 at Carnoustie which took him out of contention. The Offalyman rekindled the form of his opening round on Saturday with a 66 at Kingsbarns which looked like it might be even better after nine holes.

With five birdies on the way out he was well within reach of Hatton’s round of the day 65 but was scuppered by a bogey six at the par five third. However, he recovered well to birdie the seventh and eighth to finish with a round of 66.

One shot further back is Graeme McDowell who, like Dunne, signed for a 70 at Kingsbarns.

Meanwhile, Rory McIlroy had to show all of his battling qualities to ensure he didn’t miss the cut in his final tournament of the season and the four-time major winner said afterwards that he was determined not to end the year on that note.

The world number six was cruising at three under par through his front nine at Kingsbarns and looking to climb up the leaderboard, knowing he had to card a round of four under at least to make the cut.

However, a double bogey five at the par three second – his 11th after starting on the 10th hole – threatened to put an end to his season one round short.

But he dug in and reeled off four birdies in a row directly after that bogey to get to five under for the tournament. A dropped shot at the last was disappointing way to finish but a 68 and a total of four under meant he made the cut right on the mark.

“I wish I hadn’t bogeyed the last,” he told Sky Sports afterwards.

“It was an up and down day and I had a bit of everything in there. I was determined to make the cut and it’ll be good to play one last round at St Andrews before I wrap up my season.”

It’s been a McIlroy family get-together over the week with the 28-year-old’s new wife Erica and mother Rosie taking in the golf as father Gerry partnered his son in the team event. However, despite their best efforts over the last few holes, the father and son combination couldn’t quite do enough to make the cut in the team event with only the top 20 pairs qualifying for the final day.

“It’s been a really nice week,” McIlroy said. “The Dunhill is always very social and it’s nice to meet up with people, have a few drinks and some dinner. He [Gerry] played well. He knew he had to do something special on the way in for us to have a chance and he made a birdie, nett eagle on the seventh but it wasn’t quite enough.”

For Gavin Moynihan it was another sign that he can mix it with the big boys when he gets a chance. The 24-year-old, who plays out of The Island, finished tied-14th at the Irish Open in July – his only other European Tour start of the year – and successfully made the cut on Saturday with a level par round of 72 at Carnoustie to go into the final round at four under.

However, the same can’t be said for former champion Pádraig Harrington who suffered a nightmare finish at Kingsbarns when he looked to be comfortably cruising into Sunday. At four under playing the par five ninth – his final hole – he wound up with a double bogey seven to slip back to two under and miss the cut while, in the team competition, he and JP McManus also failed to qualify for the final day.

1 Welcome to Iten in Kenya – home of champions and cheats
2 Saracens to accept second 35-point deduction and effective relegation
3 St Michael’s conveyor belt showing no signs of slowing down
4 How do Klopp’s Liverpool measure up against greats of past?
5 Ulster look to secure quarter-final place with win against Bath
Real news has value SUBSCRIBE