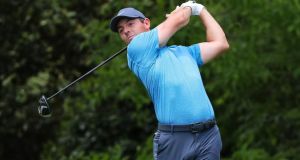 Rory McIlroy during the final round of the Wells Fargo Championship at Quail Hollow. Photograph: Jim Dedmon/USA Today

Frustration was the name of the game for both Rory McIlroy and Tiger Woods, as their respective attempts to use the final round of the Wells Fargo championship at Quail Hollow as a morale-boosting dress rehearsal ahead of The Players proved to be an elusive ambition for each of them.

The tournament was won by Australia’s Jason Day, who carded a final round of 69 to win by two strokes from Aaron Wise and Nick Watney, after finishing his week on 12 under par.

McIlroy - playing competitively for the first time since the Masters last month - once again struggled with his game, while Woods had his first birdie-free round since the 2014 WGC championship at Doral as he struggled with his putting. “I didn’t putt well again.....I made nothing. The chances I did have, I missed them all,” lamented Woods.

For McIlroy, though, it was a particularly disappointing final round after his third round 66 had moved him to the fringes of contention with what he’d termed a “half chance” bid at victory. For that, he needed to replicate his stunning final round of 2010 - when a closing 62 saw him leapfrog through the field to claim the title - but, this time, the Northern Irishman was unable to reproduce any of that drama and ultimately was confined to the role of bit player. McIlroy signed for a 71 for 281, three-under-par.

McIlroy had hoped that a strong performance at Quail Hollow - a happy hunting ground in his career, with two tournament wins in the Wells Fargo (in 2010 and 2015) - would act as a springboard going into The Players, on a course at TPC Sawgrass that historically has bettered him.

“I’ve learnt to love it, to like it. I hated it the first time. I felt like it handcuffed me,” admitted McIlroy of his first impressions of Sawgrass, explaining: “I’ve learnt to take it for what it is, a very positional golf course. You’ve got to plot your way around, and pars aren’t so bad around there most of the time. You’ve just got to get yourself in the right frame of mind to go out and do that.”

Unfortunately for McIlroy, his attempt to use the final round at Quail Hollow as a confidence booster never materialised. Although he had back-to-back birdies on the seventh and eighth holes, his momentum was stalled by a bogey on the 11th - when his tee shot finished in a fairway bunker - and then another on the 14th, where he drove into the water hazard and had to take a penalty drop before rescuing a bogey five.

McIlroy managed to get a birdie on the 16th - holing from 25 feet - but suffered as bogey on the 18th, where his tee-shot plunged into the water hazard down the left and, for the second time in his round, incurred a penalty stroke.

With The Players - the flagship tournament of the PGA Tour - next up for McIlroy, the journey on to Jacksonville will see him working over the next few days.

“I’m just not that comfortable with anything right now. I’m trying really hard to hit it in the fairway and then trying really hard to get my irons on line. It’s all just a little bit of a struggle. So trying to piece it together and make some improvements before next week. I felt as if my game improved as the week went on ..... hopefully I can build upon that next week, tighten a few areas up.”

Woods finished with a 74 for 286, well off the pace in tied-55th. The round was notable for Wood’s failure to produce a single birdie, only the sixth time in his PGA Tour career that he’d completed a round (in regular tournaments outside of the Majors) without managing a birdie or an eagle. “I need to do some practice with my putter I know those greens (at Sawgrass), know the putts....I will be grinding and working on my swing,” he said.

Séamus Power improved his position over the weekend, having survived the cut on the mark. Rounds of 68 on Saturday and a closing 70 for one-under-par 283 moved him up to a tied-28th finishing position alongside Graeme McDowell.

Shane Lowry had three birdies and a lone bogey - on the 15th, after driving into a fairway bunker - to close with a 69 for 284, level par, which gave him a tied-35th finish as he moves on to The Players at Sawgrass.