Tiger Woods: ‘I don’t know what my future holds for me’ 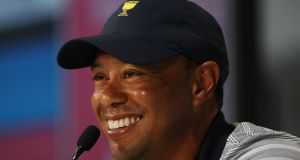 Tiger Woods admitted on Wednesday that he may never play competitive golf again owing to his well-publicised back problems. The 14-times Major champion was back in the public eye for the first time since pleading guilty to a reckless driving charge last month as a US vice-captain to Steve Stricker at the Presidents Cup.

“I don’t know what my future holds,” Woods said. “We’re taking one step at a time, it’s a process and I’m in no hurry. My timetable is basically what my surgeon says. I’m hitting 60 yard shots, very straight right now.”

The 41-year-old last played in early February at the Dubai Desert Classic, where he shot a first-round 77 before having to withdraw owing to back spasms. Woods subsequently underwent back surgery in April, the fourth such procedure he has undergone since 2014.

Woods said: “The pain’s gone, but I don’t know what my golfing body is going to be like, because I haven’t hit a shot yet. So that’s going to take time to figure that out and figure out what my capabilities are going forward.”

Woods was no less equivocal when asked about the unprecedented wave of protest across the American sporting landscape since Donald Trump’s extraordinary attack on NFL players who kneel in protest during the national anthem in a speech in Alabama on Friday night.

“There’s a lot of unrest right now, whether it’s political or racial in this country,” Woods said. “

“Hopefully, things can be healed, we can progress as a nation and come together, not just only in the near future but for perpetuity.”

Woods’s remarks came after more than 200 NFL players kneel, sit or pray during the anthem in response to Trump’s incendiary comments, a climactic cycle for a movement that began with the solitary demonstration of quarterback Colin Kaepernick, then with the San Francisco 49ers, who silently took a knee before a pre-season game 13 months ago.

Trump’s rhetoric has drawn rebuke from beyond the gridiron. The NBA star LeBron James, arguably America’s most influential athlete today, called the president a “bum” and said on Monday: “The people run this country, not one individual. And damn sure not him.”

The biennial Presidents Cup starts on Thursday at Liberty National in Jersey City, just across the Hudson River from president’s hometown. The PGA Tour commissioner, Jay Monahan, said on Tuesday that Trump was expected to attend, most likely on Sunday. “[Trump’s] people have been out and have taken a good hard look at the property. We’re thinking he is going to come out, but he hasn’t yet confirmed.

Trump would be the first sitting chief executive to attend the Presidents Cup since Bill Clinton attended in 2000 at Robert Trent Jones Golf Course in northern Virginia. Clinton, Barack Obama and George W Bush were slated to attend the opening tee shot at Liberty National on Thursday.