Galway and Castlebar take titles west of the Shannon 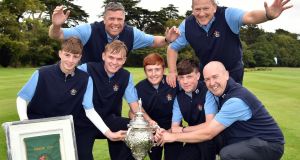 Galway washed away the pain of a third successive AIG Barton Shield final defeat when they claimed the AIG Senior Cup for the third time in 12 years with an impressive 4-1 win over Limerick at Carton House.

Beaten by Warrenpoint in the elite foursomes event on Thursday, the men from the west were worthy winners in blustery conditions at the O’Meara Course when Ronan Mullarney got up and down from 60 yards for a half in par at the 17th to clinch the winning point with a 2 and 1 win over Michael Reddan.

Seventeen-year-old Liam Power sent a youthful Galway side on their way with a 3&1 win over Owen O’Brien and after veteran Joe Lyons (45) beat Sean Poucher 4&3 and Liam Nolan (17) halved with Ciaran Vaughan, Mullarney sealed Galway’s win in style as 16-year old Luke O’Neill and Limerick’s Justin Kehoe were called in.

“We wiped the floor with Portrush (in the semi-finals), and we gave Limerick a good beating again today, so we’re absolutely thrilled,” said Galway captain, Kieran O’Mahony. “We have a fantastic group of players.”

He added: “I am just delighted. It’s a monkey off the back. We’ve lost three in a row in the Barton Shield, so this is brilliant. I am absolutely thrilled for the lads. They deserve it. They work so hard.”

Match-winner Mullarney said: “It’s huge. It is great to eventually win one. We were calling ourselves Mayo yesterday because we were getting to the final and not making it over the last hurdle.

“It hasn’t really sunk in yet, but it will sink in soon enough when people start dancing on tables later on.”

As Galway and their supporters gave a hearty rendition of “The Fields of Athenry” at the presentation, Castlebar were celebrating the first senior pennant in the club’s 107-year history following their 3-2 win over Warrenpoint in an exciting AIG Jimmy Bruen Shield final.

Mark Corrigan and Tom Moylett were two up with two to go against Stanley Weir and Eoin Durkin but despite losing both holes, Corrigan birdied the par-five 19th from eight feet to level the scores at 2-2.

That left Senator Paddy Burke and Ray Prendergast, one up with one to go against Raymond Duffin and Eamonn Rooney, to clinch the title for the Mayo men.

And when the Ulster champions opened the door by hooking their tee shot out of bounds, Burke and Prendergast made a safe bogey five to claim a two-hole win and the title

“We were beaten in the final two years ago by Ballybunion,” Senator Burke said. “We looked like winning it at one stage and then it moved away from us but on this occasion everything came together towards the end.

“The experience of two years ago stood to us greatly on this occasion.”

Team captain Shane Quigley, a son of former FAI President Pat, added: “We just pull together. We believe in each other. We fight to the bitter end.