‘I asked Rory at Sergio’s wedding, when we’d had a couple glasses of wine’ 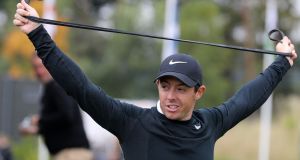 Rory McIlroy stretches ahead of a practice round at the British Masters at Close House Golf Club in Newcastle. Photograph: Owen Humphreys/PA Wire

Tournament host Lee Westwood admits he is flattered and surprised by the strength of field he has been able to attract for this week’s British Masters.

“It means a lot,” said Westwood, who is following in the footsteps of Ian Poulter and Luke Donald in hosting the £3 million (€3.4 million) tournament. “I don’t know whether it’s me, the reason why the players have turned out, but if it is, then that’s fantastic.

“Sergio doesn’t play in Britain very often, but committed so far in advance so we could use him in the promotion of the event.

“I asked Rory at Sergio’s wedding, when we’d had a couple glasses of wine, and he said if he didn’t get to the Tour Championship he would think seriously about playing here and it’s great he’s turning out. He’s one of the few players in the world that I would turn out at a golf tournament to watch.

“It’s one of the strongest fields we’ve had all year on Tour I think. I can’t believe how good a field it is.”

Westwood is one of the few players in the field to have experience of the course on the outskirts of Newcastle and the former world number one also comes into the week in good form.

The 43-year-old was ninth in the Czech Masters and third in the KLM Open a fortnight ago and said: “I feel like maybe a win is just around the corner. It would be great if it was here this week, but whenever it comes it will be fantastic.

“I feel like I’ve got a real chance. People have said, ‘You must know the course really well’, but when you turn up on a Saturday morning and play with your mates, you’re going to play slightly differently to the way I’m going to play in the tournament this week.

“Tomorrow I’m going to go around the golf course and really sort of clear my mind and look at it as if I’ve never played it before.”

Garcia is also in good form after recovering from an opening 73 to finish 10th in the Tour Championship in Atlanta on Sunday, with a first Race to Dubai title now his main focus for the rest of the season.

The 37-year-old is just under a million points behind Tommy Fleetwood in the standings and will play the Italian Open, Andalucia Valderrama Masters – which is hosted by his own foundation – and DP World Tour Championship as he tries to end the year as European number one for the first time.

“It is a motivation, but I’m not going to go crazy,” Garcia said. “If I’m playing well, it should be enough. If it’s not enough, I’ll congratulate whoever gets it.

“At the end of the day, I know what clicks for me and I don’t want to overdo something now towards the end of the year and then feel it throughout next year.”