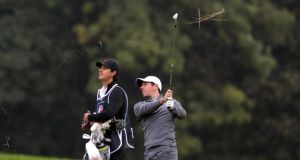 Rory McIlroy plays a shot on the second during the pro-am day at the British Masters at Close House Golf Club in Newcastle. Photograph: Owen Humphreys/PA Wire

Rory McIlroy concedes his late entry into the British Masters was influenced by the desire to avoid further accusations of receiving favourable treatment.

An injury-plagued campaign means McIlroy has played just three regular European Tour events to date, with players required to play a minimum of five to retain membership and be eligible for the Ryder Cup.

And that meant the four-time Major winner had little option but to accept an invitation from tournament host Lee Westwood to add the £3 million tournament at Close House to his schedule.

McIlroy was unable to play the required number of events in 2015 after suffering an ankle injury which forced him to miss the defence of his British Open title at St Andrews.

But European Tour chief executive Keith Pelley cited “exceptional circumstances” in granting McIlroy permission to remain in the Race to Dubai, which he led by 1,613 points from Danny Willett.

Willett felt McIlroy had been given an unfair advantage and the Northern Irishman went on to win the money list title with victory in the season-ending DP World Tour Championship.

“I want to play Ryder Cup next year so I’ve obviously got to play my five events in Europe,” said McIlroy, who had considered ending his season after the US PGA in August in order to regain full fitness.

“I didn’t really want to put the European Tour in another sticky position. So I thought I’ll play an extra one and not have to make them make the hard decision and have to answer to the membership about why I didn’t play the minimum when I could have and all that sort of stuff.”

McIlroy could also face questions from the European Tour rank and file following last week’s comments that a World Tour “has to happen” and that the “easy thing” would be for the PGA Tour to buy the European Tour.

But the 28-year-old insisted he had merely been thinking out loud when he made the comments on the No Laying Up podcast.

“I wasn’t saying it was going to happen next year, in five years or even 10 years’ time, but I think at some point something may happen,” McIlroy said.

“It was sort of just thinking out loud and seeing where this game was going – if I was to try to see 10 years into the future, where would the game be.

“I don’t know how it would work. It was just me throwing an idea out there and me throwing a thought out there. There’s so many moving parts to it and it’s so complicated but maybe one day, that’s all I was really saying.”

McIlroy remains on course for only the second winless season of his career, but insists he will feel more pressure to simply make the cut when he contests the Alfred Dunhill Links Championship with his father Gerry.

“There’s more pressure [next week] for sure. [I’ve] Just got to make sure he makes the cut and we can both play on Sunday.”