Ryder Cup day one fourballs: Breaking down the matches

What are the strengths and weaknesses of each pairing and who will win the points? 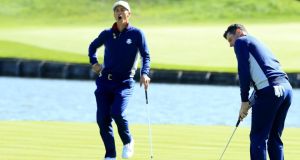 Strengths: The ying and yang effect will be in play with Rose’s calm being matched up with Rahm’s passion. Will the mix work? It most likely will, especially against a pair of big-hitters who will have to rein in their power games.

Weaknesses: Rahm’s exuberance will have to be controlled . . . but no better sidekick to have than Rose, someone who has just scooped a $10 million jackpot. Interesting to see what strategy Koepka and Finau devise.

Strengths: Bit of a surprise this one, well hidden in the practice days. But McIlroy and Olesen are very friendly off the course and that bond will surely aid the rookie Dane as he steps into the furnace. DJ’s power game comes with a great short game, which will complement Fowler’s ball-striking.

Weaknesses: The unknown! Olesen won’t ever have experienced anything like this before . . . Fowler meanwhile has never won a fourball match (one loss, two halves) in previous Ryder Cup outings.

X-Factor: McIlroy’s chance to show he is now the on-course leader of this European team . . . and how better to show that than to take down the world number one?

Strengths: Casey has never lost a Ryder Cup fourballs match, Hatton has made fewer bogeys per round than all but McIlroy and Rahm this season. For the Americans there are four majors between them. Both ranked top-10 on the PGA Tour in birdies this year.

Weaknesses: Casey hasn’t played Ryder Cup since 2008, Hatton is a rookie who hasn’t won this year. Thomas is prone to missing fairways, Spieth’s last win was the 2017 British Open.

X-Factor: Hatton’s temperament is the big imponderable. Could go either way. If Spieth’s putting clicks, the Americans could sprint away with it.

Strengths: The Europeans are arguably the two best ball-strikers in the world playing on a ball-striker’s course. For the US side there are two alpha males who won’t be in the least bit fazed by the first-morning atmosphere.

Weaknesses: Fleetwood is the only rookie in the fourball and Molinari has played six Ryder Cup matches without winning a single one. However, Woods has always been a tricky fourballs partner and has lost eight of 13 fourballs matches in Ryder Cup.

X-Factor: The Europeans are potentially – and wrongly – under-estimated. Molinari faced down Woods in the final round of the British Open, after all. On the other hand, Reed has it in him to go bananas and blow the competition away.