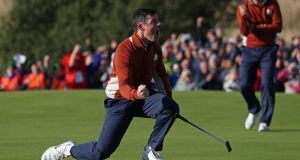 Thank the stars for Jordan Spieth and Justin Thomas. Only for them, this Ryder Cup would be a dead duck already and we haven’t even sat down to our Saturday lunch yet. Europe’s rampant Friday afternoon display was continued here this morning as they carried the fourballs by 3-1. It means Thomas Bjorn’s men carry a 8-4 advantage into the final two sessions. The US team can still make a game of this but they’ve left themselves without a minute or a hole or a shot to waste.

For most of the morning, the ghosts of Ryder Cups past were haunting the Americans. Europe were up in all four matches around the turn and it was the old guard who were doing all the damage. Paul Casey, Sergio Garcia, Rory McIlroy and Ian Poulter were racking up birdies at every turn and for the first couple of hours, nobody on the American side could keep pace. And of course, the impregnable pairing of Tommy Fleetwood and Francesco Molinari kept on keeping on.

The USA were just such a wan and ineffectual force all morning. After Spieth put them 1-up in the bottom match at 9.20 local time, Jim Furyk’s players didn’t win a single hole in any of the four matches for another 90 minutes. They had gone a similar length of time in Friday’s foursomes without a win and look how that worked out. Only for Spieth and Thomas, this would have been the first back-to-back whitewash in Ryder Cup history.

The top match was hare-and-tortoise stuff, except this time the hare ended up just about breasting the tape. Garcia and McIlroy came out blazing, rolling in putts from all distances and angles. They were a combined seven-under-par for their first 12 holes and when Garcia holed a bomb of a putt from 25 feet on the short 11th, Europe were four up.

Impressive though it looked, it was more comprehensive on paper than it had been on grass. Brooks Koepka and Tony Finau weren’t playing particularly badly, they just weren’t holing anything. Finau in particular was having a nightmare with short putts - the combined distance of the three he let slip by on 8, 11 and 13 wouldn’t have added up to the one McIlroy holed on 8 or Garcia’s on 11. By the time they walked off the 14th, they were four up with five to play and cruising.

Koepka and Finau made a game of it though. After Koepka rolled in a birdie on the par-five 14th to cut the margin to three, Garcia and McIlroy both dunked their approach on 15 to hand back another. Then Finau finally joined the party then, rolling in a 20-footer downhill on the short 16th, and all of a sudden Europe were only one-up heading down the 17th.

They finished it off in style, though. After McIlroy drained a 20-footer for par to allow Garcia have a run at his birdie putt from a similar distance, the Spaniard duly found the bottom of the cup. When Koepka promptly missed his birdie effort from 15 feet, it meant Europe won 2&1. It also pushed Garcia onto 24½ Ryder Cup points, second spot on the all-time list, a half-point behind Nick Faldo.

The middle two matches went along similar lines. Europe were never behind in any of the top three matches and though the Americans rallied briefly mid-morning, Europe polished both of them off down the stretch.

Casey sprang from the traps, stitching five birdies in his first six holes. When Tyrrell Hatton nailed one of his own on the eighth, Europe were three-up and the Americans just couldn’t handle that sort of scoring. Rickie Fowler was doing his best - he was three-under after five - but he was getting minimal help from Dustin Johnson.

After that, Casey and Hatton dovetailed perfectly. Understandably, Casey couldn’t keep his astonishing start going but then Hatton went on a run of his own, posting three birdies in six holes. It meant that the Europeans were a combined eight-under par for 13 holes; you had to give Fowler and Johnson credit for only being two-down walking up the 14th.

That was where the US ran out of gas though. When Hatton got in for a birdie on the longest par-5 on the course, Johnson had a put to match him from nine feet. Ruinously for the Americans, it horseshoed out and Europe went to the 15th tee three up with four to play. After that, a couple of pars saw them home.

Molinari and Fleetwood did as Molinari and Fleetwood do in the third match. Fairways and greens, the odd putt here and there, no colouring outside the lines. They left that to Tiger Woods and Patrick Reed, who were a combined one-under-par for the 15 holes they were able to keep the match going. Reed was appallingly out of sorts, unable to find a fairway or put any pressure on Europe with his putting. When he did finally hole one for birdie on the ninth, his shushing gesture to the crowd looked a little tragic.

Molinari put them out of their misery by stringing three birdies in a row together from the 11th. His tee shot to the first of them, a fizzing iron to three feet, was probably the shot of the morning in any of the matches. It was a small miracle that Woods and Reed were able to stay going until the 15th but predictably enough, they couldn’t even manage a par between them.

The 4&3 win kept the MoliWood train rolling merrily along. For Fleetwood, it’s the first time a rookie has won his first three matches since Garcia did it in 1999. For Molinari, it feels incredible to think that he came into this week having failed to win any of his six matches in his previous two Ryder Cups. They are the iron horse of Bjorn’s team now.

As are Spieth and Thomas for Furyk. When the morning looked to be getting completely away from the US team, it was the turning of the bottom match that kept American interest going. Thomas was scintillating coming down the stretch, holing clutch putts on four holes in a row from the 14th to the 17th to close out a 2-up win over Poulter and Jon Rahm.

1 Ken Early: Frank Lampard’s problems start at number one
2 James Ryan set for up to 12 weeks on the sidelines
3 Man United in talks with Dortmund over €100m deal for Sancho
4 Rory McIlroy admits missing the crowds as he looks to end Major drought
5 All in the Game: Klopp gets the last laugh in quiz show
Real news has value SUBSCRIBE