With greater depth in Majors another first-time champion is likely 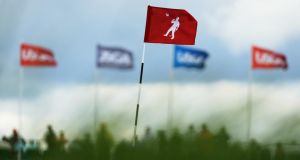 The 18th pin flag, with a representation of Arnold Palmer’s winning moment from the 1960 US Open, is diaplayed during the final round of the 2017 US Open at Erin Hills. Photograph: Richard Heathcote/Getty Images

The winds of change can take you by surprise. Walking in through the gates here at Erin Hills for the final round of the 117th US Open, the security guard joked, “Welcome to Alaska.” It had to do with the cold, northerly wind which penetrated across the glacial drumlins of old to make the fescues dance to a crazy rhythm and similarly the flagsticks, in danger of blowing away but for being planted firmly into tin cups.

Yet, it seemed as if the wind was a metaphor for change on a grander scale for what has been happening in golf, as the final day leader board for the US Open predominantly featured names who had never before won a Major title. It is almost as if a sleight of hand has been going on in these biggest of championships, a changing of the guard if you will.

That changing of the guard, of course, has had much to do with the playing demise of Tiger Woods. It is nine years since Woods won his 14th career Major title when, with one good leg, he defeated Rocco Mediate in a play-off for the US Open at Torrey Pines in 2008. Little did we realise at the time that it could conceivably be the last of Woods’s Major triumphs, for it seemed only a matter of time before he would surpass Jack Nicklaus’s record of 18.

Woods, though, has not been the same man since, either on or off the golf course. It was actually his great friend Michael Jordan who once made the remark about passing the baton onto the next generation, in his case of basketball players. “I want to be the bridge to the next generation,” said Jordan and so it was that LeBron James and Stephen Curry were among those to ensure that link.

In golf, it has been somewhat different, and probably more interesting, because nobody has really taken on the role of being the dominant player. We thought that Rory McIlroy would be that man, and he could yet be if injuries - as they have done in 2015 and again this season - don’t continue to be an issue. We thought Jason Day. Or Dustin Johnson. May Jordan Spieth.

But none of them have managed to do what Woods did, to dominate as he did. And the statistic that the six winners of Majors coming into Erin Hills were all first-time champions reaffirms that this generational change plays for wide open fields and perhaps greater depth: the sequence started with Day’s win the 2015 US PGA and continued with all four 2016 winners - Danny Willett (US Masters), Dustin Johnson (US Open), Henrik Stenson (British Open) and Jimmy Walker (US PGA) - and on to this year’s Masters, where Sergio Garcia finally won one of the big ones.

What is apparent from these breakthrough champions - perhaps with the exception of Willett - is that they had all served their time, nobody as much as Garcia who had the distinction of playing in more Majors than any other player without a win. His Masters success came in his 74th Major appearance.

“I think it’s just luck,” said Day of the run. “And I’m not saying luck as in because they’re lucky people. I’m just saying we’ve just gone through a stretch guys have just popped up and won. You’ve got to understand that if you look at the last six major winners, they’re all different ages, all different styles of play, all different ages, from Sergio to me to Dustin Johnson to Henrik Stenson and the guys in between. The way we play golf is totally different. So it’s really hard to kind of really put it down to one thing.”

Then, what happened here? The world’s top three ranked players all departed the property before the business end of the championship. Johnson. McIlroy. Day. It constituted the first time in any Major that the top three players in the world rankings had all failed to survive a cut. In each case, different circumstances could be used as excuses. DJ became a father for the second time on Monday and was a late arrival to the tournament. McIlroy has been bedevilled by injury. Day’s mother has been unwell. None of the players offered any such excuses.

But the names on the final round leader board, perhaps, herald an emerging generation. Rather than just those who have served their time in their respective quests for Majors, this new generation - Justin Thomas (24) Tommy Fleetwood (26), Brooks Koepka (27), Si Woo Kim (21) et al - are in their twenties, are able to hit it long, work out and are part of a new breed who are not afraid of what is within touching distance.

Nicklaus, the greatest of them all, once observed of the challenges involved in winning a Major. “The Majors are supposed to take more to win than other tournaments. They’re supposed to be about many things, more of a total examination on a fair but challenging golf course. Not only is it about the driving, but also the iron play, the short game, the putting, the test of your composure, your preparation, your approach and attitude and toughness. It’s about knowing when to back off, knowing when to get aggressive, and knowing that you’re facing all these challenges while playing against the world’s best players, the very best competition.”

As we’ve seen these past few years, there is no one dominating in the way that Nicklaus himself or Woods once did. These days, rather than just luck, it’s a more open playing field because there is greater strength in depth.