Steady starts for McDowell and Power in Memphis

Meanwhile, Rickie Fowler struggled to a 74 in final tournament before the US Open 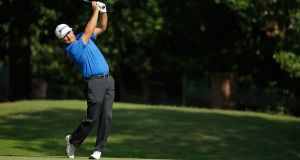 Graeme McDowell of Northern Ireland plays his shot on the 16th hole during the first round of the FedEx St. Jude Classic at TPC Southwind in Memphis, Tennessee. Photo: Andy Lyons/Getty Images

Rickie Fowler’s preparations for next week’s US Open have been hindered as he battles to make the cut at the FedEx St Jude Classic in Memphis.

The 28-year-old is the only player in the world’s top 10 competing on the PGA Tour this week after saying there is no better build-up for a major than playing.

Graeme McDowell is of the same philosophy and he enjoyed a better start to the tournament than Fowler with the 2010 US Open champion carding an eventful round of 69 – one under par.

McDowell managed six birdies in his round but they were offset somewhat by three bogeys and a double.

Seámus Power sits alongside him at one under after a somewhat disappointing back nine of 36 undid the good work seen on the way out.

But Fowler might be having second thoughts about playing the week before a major after an opening round 74 left him four over par and in grave danger of not being around during the weekend.

Fowler is 10 shots off the lead, shared by four men on six under.

American trio Matt Every, Scott Brown and Stewart Cink and Colombian Sebastian Munoz all carded 64s, with former Masters champion Charl Schwartzel a shot back on five under.