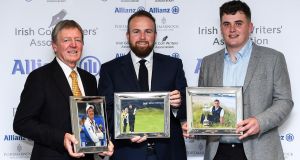 Shane Lowry with the Professional Player of the Year award for 2019 award, with Des Smyth with the award for Distinguished Services to Golf, and James Sugrue with the Men’s Amateur of the Year Award. Photograph: Matt Browne/Sportsfile

You only make the breakthrough once, and Shane Lowry’s historic win in the 148th British Open at Royal Portrush, his first career Major championship, has earned the popular Offaly man recognition as recipient of the Irish Golf Writers’ Association Professional Player of the Year for 2019. The award was presented at an awards dinner, sponsored by Allianz, at Portmarnock Hotel & Golf Links in Co Dublin on Thursday night.

On the championship’s return to the Causeway coast for the first time in 68 years, Lowry conquered all-comers – claiming a six-stroke winning margin over runner-up Tommy Fleetwood – to lift the most famous trophy in the sport.

“I don’t know if I will ever top this season again, but I hope I do . . . . [in Portrush] I felt I could sneak in there and go about my business the way I wanted to. I played the golf of my life on the Saturday, played great all week, but the golf I played on the Saturday won me that event. I am sure the Claret Jug will be on the table on Christmas day. It’s amazing, what a trophy to have won,” said Lowry.

In a quite extraordinary year for Irish professional golfers, with Rory McIlroy scooping the FedEx Cup title on the PGA Tour ( in a season with four victories), and Leona Maguire impressively claiming a full LPGA Tour card for 2020, the standout achievement was that of Lowry’s.

Lowry also claimed the Abu Dhabi Championship earlier in the season, his first Rolex Series title, but it was his performance at Royal Portrush – where he became the first Irishman to lift the Claret Jug on Irish soil – that set him apart in earning a second IGWA Professional of the Year award, having first won in 2015.

James Sugrue, from Mallow in Co Cork, had paved the way making for a unique double in Irish golf in 2019. The 22-year-old won the Amateur Championship at Portmarnock Golf Club in June, where he produced a resolute performance throughout the week – from surviving strokeplay qualifying at The Island, and then taking out all-comers in the matchplay phase at Portmarnock – to beat Scotland’s Euan Walker in the 36-holes final.

Lurgan’s Annabel Wilson, a two-time Irish girls’ champion, made the step-up in grade to claim the Irish Women’s Close championship on the final hole of a magnificent duel with Paula Grant at Woodbrook Golf Club.

Wilson, currently in her first year of a golfing scholarship at UCLA in California, has been recognised as one of the up-and-coming stars of the women’s game here, having already represented Ireland in two World Amateur Team Championships.

Des Smyth has been recognised with the Distinguished Services to Golf award for his outstanding contribution to the sport in Ireland. After an honour-laden career on the PGA European Tour and also on the seniors circuits in the US and Europe, Smyth’s influence has extended to helping fledgling professionals in recent years in his role as a leader for Team Ireland Golf and an ambassador for the Dubai Duty Free Irish Open.