Cormac Sharvin five off the lead at Cyprus Open

Pádraig Harrington remains four under par at the Bermuda Championship 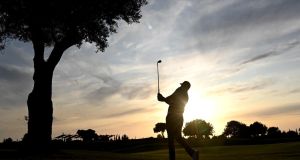 Play at the Cyprus Open was suspended due to fading light on Friday. It is due to resume at 8am local time on Saturday. Photograph: Getty Images

Richard McEvoy has not recorded a single top-10 finish since getting the better of Bryson DeChambeau in winning the European Open more than two years ago. But a new ball and putter combination paid instant dividends as the 41-year-old Englishman claimed a share of the clubhouse lead in the Aphrodite Hills Cyprus Open.

McEvoy carded a second successive 66 in the inaugural edition of the £900,000 event to join Scotland’s David Drysdale and Finland’s Sami Valimaki on 10 under par before play was suspended due to fading light.

Former Ryder Cup winner Jamie Donaldson and Marcus Armitage were 11 under par with one and three holes to complete respectively, with play due to resume at 8am local time on Saturday.

Ireland’s Cormac Sharvin goes into the weekend just five shots off the clubhouse lead - his six birdies in a four-under par round of 67 leaves him six-under par overall. But Jonathan Caldwell’s one-over par round of 72 leaves him two strokes off the projected three-under par halfway cut-off.

McEvoy had missed the cut in four of his last five starts and began the week ranked 1,258th in the world, but carded six birdies and a solitary bogey in pursuit of his second European Tour title.

“My results probably haven’t shown my actual overall game,” he said. “I’ve been playing okay, but the results have been pretty poor. Putting’s been a very weak point in the last couple of months.

“I’ve changed putter this week, which has been good for confidence, and I’ve also done a ball change this week as well. I did some testing and just found that the ball was dropping out the sky really quickly with the cold weather, so I decided to try something else and it seems to be working really well.”

While US Open champion DeChambeau — who apologised for his brief handshake with McEvoy after making a triple bogey on the 72nd hole of the European Open — has successfully transformed his game through massive hitting, McEvoy believes chasing distance was a big mistake.

“Over the last couple of months I sort of felt like I lost my identity a little bit,” added McEvoy, who ranks 146th on the European Tour in driving distance.

“I just said to myself ‘I don’t need to be hitting it 30 yards further, 10 yards further would be a massive increase for me’. If I get it on the fairways then I’ve got a chance of getting it close on the greens and giving myself chances.”

Drysdale was annoyed to bogey the 18th after a “pathetic” short-range par putt came up short of the hole, but a second round of 67 left him well placed to contend for a first European Tour title at the 509th attempt.

“There’s a lot of golf to be played,” added Drysdale, who lost a play-off for the Qatar Masters in March.

“I haven’t had that many opportunities over my career. I’ll give it a crack over the weekend and see what happens.”

Elsewhere Pádraig Harrington failed to follow up on his first round 67, remaining at four under par after Friday’s second round at the Bermuda Championship. Harrington teed off on the back nine at Port Royal Golf Club, following up a birdie on the 13th with a bogey on the 15th. A second birdie on the Par 5 second hole was followed by another bogey on the sixth. Seamus Power is one over par after a three over par second round.

Second round scores and totals (British unless stated, par 71)