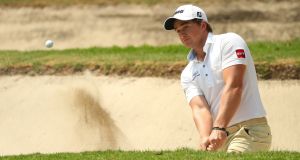 Paul Dunne of Ireland plays out of a bunker onto the first green during the second round of World Golf Championships-Mexico Championship at Club de Golf Chapultepec in Mexico City, Mexico. Photo: Gregory Shamus/Getty Images

Shubhankar Sharma’s remarkable rise continued to gather pace at the WGC-Mexico Championship as he claimed a two-shot halfway lead at Chapultepec Golf Club.

The 21-year-old from India was outside the world’s top 450 when he won the Joburg Open in December, and he followed that up with victory in Malaysia last month.

Those wins have put Sharma top of the European Tour’s Race to Dubai, while he has also risen to 75th in the official world golf ranking.

Making his World Golf Championships debut, Sharma opened with a round of 65 on Thursday and stormed home in 31 to follow up with a five under par 66.

At 11 under for the week Sharma leads by two from Spaniards Rafa Cabrera Bello and Sergio Garcia, as well as American Xander Schauffele.

For Paul Dunne – the lone Irishman in the field – it was another disappointing day as he struggled to a round of 75 to sit well back at six over par.

However, there is no cut in the elite-field event meaning that Dunne will have the chance over the weekend to move up the leaderboard and boost his world ranking points. After starting with a birdie he carded bogeys at the fourth and eighth to go out in one over par before quite an eventful back nine.

Birdies at the 11th and 15th came either side of a double bogey at the 12th with three other bogeys leaving him to sign for 75.

“I played so well, and the bogeys that I made today were just three-putts. Otherwise I just get the ball in play all day and it was great to finish with three birdies in a row.

Having made a perfect start by driving to a couple of feet on the reachable first and converting for eagle, Sharma three-putted the second and third for consecutive bogeys.

However, he reeled off five unanswered birdies on the back nine — including a hat-trick over the last three holes — to continue a remarkable first WGC appearance.

Garcia eagled the 11th from 20 feet and also had four birdies in a round of 65, while his compatriot Cabrera Bello birdied four of his first six holes, and eagled the 15th, as well as carding two bogeys in a 67.

Schauffele goes into the weekend bogey-free after the 24-year-old carded three birdies in a 68.

England’s Chris Paisley went from six-under-par midway through his second round to two-under-par after dropping four shots in three holes on his back nine.

1 Born to ride, born to win: Sam Bennett, the making of a green machine
2 Lance Armstrong’s latest move serving him well on many fronts
3 Next stop the Champs-Elysées in green for Sam Bennett
4 Keith Duggan: Surreal story of John Delaney needs to act as a wake-up call for FAI
5 Ulster’s European dream clinically crushed by Toulouse
Real news has value SUBSCRIBE