Suzann Pettersen out of opening Solheim Cup session with illness 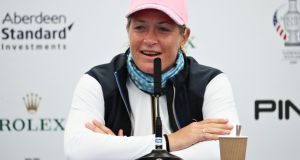 A hoarse Suzann Pettersen of Team Europe speaking to the press before the Solheim Cup at Gleneagles in Scotland. Photograph: Jamie Squire/Getty Images

Suzann Pettersen’s propensity to create headlines at the Solheim Cup shows no sign of abating. Four years after being central to chaos over a concession in Germany and two on from having to withdraw from the meeting of Europe and the US at the 11th hour, the Norwegian undertook media duties at Gleneagles almost bereft of her voice. Pettersen did not reveal what precisely her ailment is, nor what she has been prescribed for it, but all the available evidence was not good.

The Norwegian, a controversial pick for this contest having taken a break from competitive golf to have a child, insists she will be fine to compete here, but she has been spared Friday morning’s foursomes session.

“My golf game is in great shape,” the 38-year-old said. “Being here it feels like I never left the game, which is kind of nice. I don’t know if it’s the atmosphere, the energy or everything that Solheim is all about that always kind of brings out the best of all of us.

“So this time around the team atmosphere has been the best I think I’ve ever been a part of. And it’s fun to be around all these new youngsters who are so energetic and really good golfers. I’m fine. It’s just from here [the neck] up, so I’m fine.”

Catriona Matthew, whose wildcard faith in Pettersen – she is outside the world’s top 500 – raised eyebrows, is similarly relaxed about her player.

“She said she is actually feeling pretty good, obviously she is just a little hoarse,” said Europe’s captain. “She is feeling good. Her caddie is probably quite happy about it; she isn’t speaking so loudly.”

Carlota Ciganda and Bronte Law will lead Europe’s bid to reclaim the cup in the opening match. Georgia Hall will team up with Céline Boutier against the US’s Lexi Thompson and Brittany Altomare. Caroline Masson and Jodi Ewart Shadoff feature in the penultimate foursomes tie with the Korda sisters, Jessica and Nelly.

Juli Inkster, the US captain, admitted she had to be convinced to allow siblings to team up for the first time in a Solheim Cup. “They asked me to play together. I wasn’t too keen on it. But the more I thought about it, it would be stupid not to play them. It’s not often you have two sisters on one team. They should have the right to play together.

“They are two really different personalities even though their games are the same. I felt like I could put one on one side and one on the other side but they are strong together and wanted to play together.”