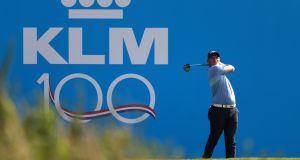 England’s Callum Shinkwin tees off on the 18th during the first round of the KLM Open at The International Golf Course in Badhoevedorp. Photograph: Dean Mouhtaropoulos/Getty Images

Callum Shinkwin carded a superb 66 to earn a one-shot advantage after the first round of KLM Open in Amsterdam.

The Englishman is in danger of losing his playing privileges following a stop-start campaign but belied his 446th place in the world rankings to take advantage of ideal scoring conditions in the morning to finish on six under par at The International.

The 26-year-old was forced to withdraw at the European Masters last month due to food poisoning before retiring during the second round of last week’s Porsche European Open with a back injury and needs some good results to ensure another season on the European Tour.

However, Shinkwin eased his pain when he reached the turn in 32, courtesy of an eagle, three birdies and one dropped shot, before a blemish-free back nine – which included two more gains – helped him to the top of the leaderboard.

“My golf as of late has not been great as has my health as well,” Shinkwin told europeantour.com. “But the golf is still not there, still very uncomfortable, but I managed to turn it round today and shoot a good round of 66.

Sergio Garcia, the 2017 Masters champion and 15-time European Tour winner, led another group of seven players which sit one shot further adrift at the 100th edition of the KLM Open, with only James Morrison threatening the leaderboard from the afternoon starters to sit at four under.

Defending champion Wu Ashun remained in contention at three under par alongside two-time tournament winner Joost Luiten, who was three over after nine holes but carded six birdies on his back nine to join the Chinese player and eight others for a round of 69.

Gavin Moynihan leads the Irish challenge after a two-under 70 in which he carded six birdies.

Paul Dunne recovered from an early double-bogey to card a one-under 71 and sits alongside Pádraig Harrington, while Michael Hoey posted a three-over 75.

SCOREBOARD
British and Irish unless stated, par 72, (a) denotes amateur