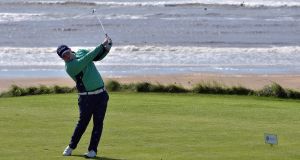 Ireland’s slim hopes of challenging for the Home Internationals evaporated when they fell 10-5 to defending champions England on day two at Lahinch.

Mallow’s James Sugrue was unable to tee it up at all on Thursday, and the amateur champion will play no further part in the matches on Friday as he prepares to take three weeks off for rest and treatment on his lower back.

Scotland beat Wales 9½-5½ and take on England for the Raymond Trophy as Ireland play for pride and third place against the Welsh.

After defeat to Scotland on day one, Ireland needed to get off to a good start but instead fell 4-1 in the foursomes.

Ireland fought back in the singles with early wins for Purcell over Sloman (3&2), Rafferty over Plumb (2&1) and Sean Flanagan over Ben Hutchinson (5&4). And while Mullarney birdied the last two holes and salvaged a brilliant half with Harry Hall after being three down with four to play, the middle order did not deliver.

The Holywood star was two down after nine holes but after winning the 12th, 14th and 15th to take the lead, he lost the 16th and 18th to birdies to fall by one hole.