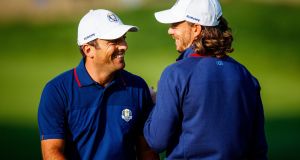 Frankie is going to Hollywood

Tommy Fleetwood sought to make a wee joke of it all, as his European teammate Francesco Molinari confirmed that he would be upping sticks - en famille - to go and live in California. “But you said you’d never leave me,” posted Fleetwood to the other part of the so-called “Moliwood” duo, a moniker earned by their exploits in the 2018 Ryder Cup.

But that Frankie is going to Hollywood (or somewhere in those parts) with wife and two young children at this stage of his life (he is 37) will cause some ripples in the European Tour, who are struggling to get going again and who are edging deeper and deeper into the shadows of the big brother stateside.

Molinari hasn’t played since teeing up in the WGC-Mexico Championship back in March and, having opted not to play in any of the initial tournaments on the rebooted PGA Tour schedule, he has seen himself fall downwards in the official world rankings. He is currently 30th, having finished 2019 ranked in 18th position.

In confirming that his family would move to California and of his plan to resume playing at next month’s US PGA at Harding Park in San Francisco, Molinari talked of the “very strange few months for everyone” since the onset of Covid-19 and of why he and his family, having lived in London for 11 years, were now making the move.

“(The time off) made me think about the future and what I want to achieve in the coming years, from a professional point of view but mostly from a family standpoint . . . . the next chapter of our life is going to be in California, where we hope to be safe, happy and to spend time together as a family,” he said.

At this time of his career, the Italian’s move across the Atlantic and onwards across the American continent for a new home base - on the back of so many other Europeans settling down in the USA, primarily in Florida where Rory McIlroy, Graeme McDowell and Ian Poulter are already based - will only increase the anxiety in Wentworth HQ that the pull of the PGA Tour is getting stronger.

Pity Séamus Power didn’t manage to make further inroads up the FedEx Cup rankings in his endeavours to regain a PGA Tour status in Rocket Mortgages Classic in Detroit - where he eventually finished tied-12th behind Bryson DeChambeau - but it would seem those stateside require some educating about the correct spelling of his name.

One Getty photograph out of the tournament was captioned, “Shamus Power of Ireland” . . . .although if the Waterfordman can continue to get his name onto leaderboards it should help his future name recognition!

Power’s efforts in Detroit saw him from 206th to 177th on the updated FedEx Cup standings, in his efforts to break into the top-125 (on limited tour outings given his limited status). A top-10 finish would have got Power into this week’s Workday Charity tournament. Instead, he reverts back to the Korn Ferry Tour for the San Antonio Challenge at The Canyons in Texas.

€500,000 - that’s the total purse for this week’s Austrian Open, which marks the restart of the European Tour schedule which shuddered to a halt with the coronavirus pandemic following the Qatar Masters in early-March. Two Irish players, Gavin Moynihan and Niall Kearney, are in the field for the tournament in Atzenbrugg.

“The only thing you can do is learn from this experience and feel more and more comfortable the more times you’re in that position” - Matthew Wolff, who started out with a three-shot lead, on ultimately finishing three behind winner Bryson DeChambeau at the PGA Tour’s Rocket Mortgages Classic in Detroit.

“My two week UK quarantine is finally over. It’s been great playing Call of Duty all day with my friends back in SA, but now it’s time to move some dirt” - European Tour player Brandon Stone on being able to hit the range again ahead of the upcoming British Masters, the first of the European Tour’s six-week UK Swing series.

“Everyone talking about Bryson hitting it miles, but no one thinking of his poor caddie . . . . 387 yards, in one sitting, is a fair trek with that bag on your back” - Angus Hay, bagman for Joakim Lagergen on the European Tour, feels some sympathy for fellow-looper Tim Tucker. No doubt Tucker’s percentage share of the $1.35m payday eased the pain.

“Dear @PGATOUR, @b_dechambeau’s distance has nothing to do with other fellow pros. So please do not set the course longer. Sincerely, Ben” - South Korean golfer Ben An.

7th July 2002 - Michael Campbell just about avoided a great collapse to get his hands on the Smurfit European Open at The K Club, but it was one of those days where there were potentially many red faces: Retief Goosen had departed for Dublin airport to catch a flight convinced he had no chance, only to miss out on a play-off by one stroke after the Kiwi - seemingly in control for much of the final round - shot four successive bogeys from the 15th to stumble home.

Campbell’s closing round 73 for a total of six-under-par 282 left him a stroke clear of a quartet that featured Pádraig Harrington, Bradley Dredge, Paul Lawrie and Goosen. Campbell had been five strokes clear of Harrington walking off the 14th green but found it difficult to close the deal, and ultimately was aided to an extent by Harrington missing a three-foot par putt on the 17th and then finding water on the last.

“For 14 holes I was in a zone, I had the trophy in one hand but not the other . . . . I think my emotions got too far ahead of myself and I made some ridiculous mistakes,” said Campbell of limping home to victory.

Q - In a round of a club matchplay competition, the two players are scheduled to tee off at 9am. However, both players arrive late to the first tee: Player A arrives ready to play at 9.02am and Player B arrives at 9.04am. What is the ruling?

A - When both players in a match arrive at the starting point ready to play no more than five minutes after their starting time and neither has experienced exceptional circumstances, they both get a loss of hole penalty and the result of the first hole is a tie (Rule 5.3a/5). The match starts at the second hole all square. However there is no penalty if the players play the first hole to get to the teeing area of the second hole.

View from Melbourne: Sporting fabric of the city suffering from second lockdown 06:30
Madigan’s primary goal is Ireland caps after switch to Ulster 06:00
Seán Moran: It won’t take much before cancelling All-Ireland looks like a solution 06:00
My sporting disappointment: Battered, bloodied, broken by The Wall 06:00
Players focus more on life outside game due to lockdown, says GPA 01:00
Here is your handy guide to sport on television this week