Shane Lowry one shot off the lead at Portugal Masters 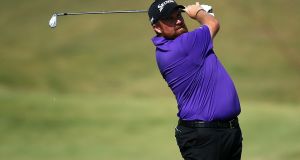 Shane Lowry during the first round of the Portugal Masters at Dom Pedro Victoria golf course. Photograph: Jan Kruger/Getty Images

Shane Lowry is one shot off Australian Lucas Herbert’s lead in the Portugal Masters after a promising first round of 64 in Vilamoura.

The Offaly native hit four birdies in an impressive front nine, and despite five more in his final nine holes he dropped shots on the 12th and 17th holes.

Herbert carded a sparkling eight-under-par first-round 63 to take a one-shot lead as Sergio Garcia warmed up for next week’s Ryder Cup with an opening 66.

Starting on the back nine, Herbert struck four birdies and an eagle to turn in six-under before adding two more birdies on to overtake early pace-setters Matt Wallace and Eddie Pepperell.

The English duo were a stroke behind the Australian alongside Lowry, with China’s Haotong Li in fifth on six under.

Garcia, named as a wildcard in the European Ryder Cup team, shared sixth place in a group of 10 players on five under par.

The Spaniard missed the cut in all four majors this year but made an encouraging start with birdies on the 10th, 12th and 14th holes to turn in three under.

He added four more birdies on the front nine and despite bogeys at the third and seventh holes, Garcia was pleased not to show more signs of ring rust after taking a month-long break from golf.

“More than anything it’s nice to be out here and... get the competitive juices going,” said Garcia, whose last tournament appearance was at the PGA Championship in August.

“Obviously, I want to try to put together as many good rounds as possible but next week is different.

“I would have loved it to be a little better. I played well, I didn’t play extraordinarily. I still feel like I left easily three or four shots out there, a couple of easy birdie putts here and there.”

Paul Dunne will be content with a first round of three under par leaving him five shots off the lead.

Ryder Cup vice-captain Padraig Harrington, a Portugal Masters winner in 2016, is two over par. Like his fellow Irishman Robin Dawson, Harrington failed to recover from a double bogey in a disappointing round. The 22 year-old Dawson, making his professional debut following his recent switch from the amateur ranks, finished Thursday’s round three over par.