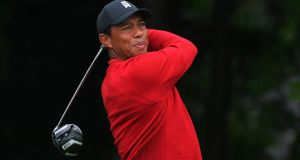 Tiger Woods has praised the quality and depth of the European team ahead of next week’s Ryder Cup in France. Photograph: Drew Hallowell/Getty Images

A ringing endorsement of the strength of Europe’s team for next week’s Ryder Cup has arrived from Tiger Woods, the most high-profile member of the United States contingent who will seek to retain the trophy in France.

Woods, speaking at East Lake on the eve of the PGA Tour’s season-ending Tour Championship, will play in his first Ryder Cup since 2012 after receiving a wildcard pick from Jim Furyk. When asked whether odds-on American favouritism for the biennial event and the widespread analysis that this is one of their strongest ever teams was valid, the 14-times Major champion indulged in what could be interpreted as mind games.

“No, I think the European side is one of the best they’ve ever had,” said Woods. “We have a solid team, but so do the Europeans. It plays out over three days. It’s about playing well at the right time and partnering up well at the right time and making putts. I think both teams are very deep this year going into the event, so it’s going to be a lot of fun for both sides.”

Woods reflected candidly on six years ago, when Europe staged a famous Sunday comeback at Medinah. As Martin Kaymer holed the putt to keep the Ryder Cup in Europe, one match ahead Woods’s singles tie against Francesco Molinari was all but immaterial.

“It was tough because we had a four-point lead starting out the day on Sunday,” the 42 year old recalled. “I had worked my way back against Francesco. I was one down with a few to go, I turned the match and I was one up. I thought my match would be the deciding point. Some of the guys had some tough losses.

“I wasn’t feeling physically well that Ryder Cup and it’s where my back started bugging me. That’s the only wave I’ve ever missed, the Saturday afternoon wave because I told Davis [Love III, the US captain] I just really couldn’t go. I said: ‘Can you put me out later on Sunday because I need the time to get my back organised here?’

“It was tough watching them celebrate from the 18th fairway when I thought we should have won that one. It was tough listening to the celebrations at the Belfry in ’02. I was on the 17th hole playing against Jesper [Parnevik], listening to them celebrate going up 18. To hear that sound and to not have the point count on Sunday is tough. It’s a tough situation. It’s tough as a team, it’s tough for our captain, it’s tough for everyone involved not to have won the cup because that’s the ultimate goal.

“I have missed playing in it, missed competing in it. I’ve been a part of these teams now for the better part of 20 years. To have earned the confidence of my team-mates and my captain to have been selected is something that gives me a lot of excitement going into the cup.”

Over the coming four days, Woods can concern himself with individual matters. His rapid recovery from a fourth back surgery to the point where he is one of only 30 players who have qualified for the Tour Championship is stunning in itself.

“When I was laying on the ground and couldn’t move for a number of months, golf was the furthest thing from my mind,” he said. “It’s great to have accomplished one of the goals I set out at the beginning of the year, to make it back to East Lake to be part of the Tour Championship. I’ve accomplished that. Now I want to get the win and then head into next week at the Ryder Cup.

Rory McIlroy, the only Irish player in the field, is 17th in the standings and would need to win and see FedEx Cup leader Bryson DeChambeau finish in a tie for 11th or worse to have any chance of scooping the $10 million bonus in Atlanta. - Guardian service

Rory McIlroy aiming to cut out the mistakes with Augusta looming 12:52
Sportsman to statesman, Marcus Rashford is a ray of light in the darkness 12:29
Patrick Cantlay takes Zozo Championship after late ambush 11:10
John Cooney called into Ireland squad for France clash 10:58
All in the Game: Klopp’s Amsterdam subs don’t go down well 10:00
Here is your handy guide to sport on television this week