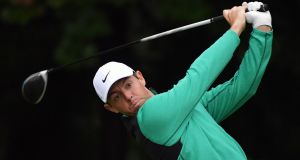 Rory McIlroy will need a helping hand from others as well as himself. Photograph: Drew Hallowell/Getty Images

Technically, they all have a chance to scoop the jackpot; realistically, it ain’t going to play out that way. Bryson DeChambeau tops the FedEx Cup standings on the PGA Tour heading into the Tour Championship at East Lake, with destiny firmly in his own hands. But for Rory McIlroy to repeat his winning feat of just two years ago, when he grabbed the $10 million bonus prize, he’ll need a helping hand from others as well as himself.

Here’s the state of play: McIlroy – the sole Irish player to reach the final counting event of the US season – is 17th in the FedEx Cup standings.

Chances are, McIlroy’s focus will be on the tournament itself, ignoring all those other scenarios. The prize of winning the Tour Championship is, of itself, one worth winning and would make McIlroy a multiple winner this season given that his only success so far came in the Arnold Palmer Invitational at Bay Hill back in March.

The Northern Irishman is one of five of Thomas Bjorn’s European Ryder Cup team in action in Atlanta. By comparison, 11 of the USA team are competing: the odd man out is Jordan Spieth, who failed to make the limited 30-man field closure to the season. McIlroy will have Francesco Molinari, Tommy Fleetwood, Jon Rahm and Paul Casey for company.

One other member of Bjorn’s team will be in action this week, as Sergio Garcia – a wild card pick for the match – has entered the Portugal Masters (playing on a sponsor’s invitation). In racing parlance, the Spaniard has been very lightly raced of late: he has only played four tournaments since (and including) the British Open at Carnoustie in July, when he missed the cut. In fact, Garcia has missed the cut in three of his last five tournaments going back to that Major and has a best finish in that run of tied-24th in the Wyndham Championship, which was his last competitive appearance.

Back at famed East Lake, five players have destiny in their own hands: DeChambeau, Rose, Finau, Johnson and Thomas. Each of them knows that a win in the Tour Championship will also bring with it the bonus prize of the FedEx Cup jackpot. Thomas, winner on the double last year, is the only one of the five to have savoured that feeling.

Interestingly, another storyline involves a certain Tiger Woods. Although only 20th in the FedEx Cup standings, Woods – a two-time FedEx Cup winner, with a great record around East Lake – has done remarkably well to make it to the tour finale given he started the year unsure of his fitness levels following on from spinal fusion surgery.

Woods, one of Jim Furyk’s wild card picks for Paris, hasn’t yet won since his comeback from injury, but he has contended in a number of tournaments – including the last two Majors of the season, the Open at Carnoustie, and the PGA at Bellerive – and has four top-10 finishes in his last seven tournaments.

What we know is that Woods – who has two wins and four career runner-up finishes at East Lake – will be up for the challenge.