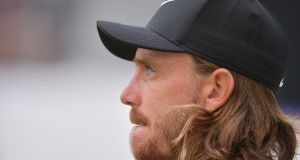 Next Friday, September 28th, will forever hold a place in Tommy Fleetwood’s heart. It is hardly being dismissive of the golfer’s idyllic family backdrop to suggest that in 2018 the date will carry extra resonance. “It will be a very special day,” Fleetwood explains. “I’ll stand on the tee and it’s my son’s first birthday as I play in my first Ryder Cup. As a Friday goes, that one will take some beating. The funny thing is Frankie won’t have a clue, he isn’t bothered one little bit.”

Daddy is prepared for a wave of emotion. And no wonder; Fleetwood’s Ryder Cup debut is just the latest high point in a career he has retrieved from the depths of despair. “I’ll quite happily go with the flow,” the world No 12 adds. “It is important to me to take the moment in and realise where you are, what an amazing achievement it is to get there. It’s a moment everybody wants in their life. As nervous as people say you are – and don’t get me wrong, I’ll be really, really nervous – you owe it to yourself to embrace it because that’s what you have wanted for such a long time.”

No assessment of Fleetwood’s rise is complete without a nod towards earlier professional trauma. A second round of 76 at the 2015 Open sent the Southport man into a 12-month tailspin, during which there were times when he was scared to hit the ball – the yips. Fleetwood, earlier a prodigy, was 188th in the world and “demoralised”.

By June this year he was producing a stunning 63 to come within touching distance of US Open glory. On Thursday he will tee off alongside Tiger Woods in the $10m conclusion to the PGA Tour’s season. The most endearing thing about Fleetwood’s rehabilitation is that not a single person within the game’s upper echelons would begrudge him it.

“Struggling has done a couple of things for me,” Fleetwood says. “It is an experience to have and it makes you appreciate the good stuff. Sometimes now I get frustrated but it is important when those feelings come to snap out of it and realise how well you are doing, how tough the game is. My experiences are a help.

“I was a shot away from winning a major this year and had a chance in the Open. The important thing is you keep improving but remember where you were a couple of years ago.

“I have always been a very patient person, I am a perfectionist but have a high level of patience and think that’s one of the things when I started my comeback that really helped. . .I wasn’t rushing anything as long as I knew I was on the right track.

“The other thing about having that yip off the tee is that when I have played in majors, even the 63 in the US Open when I knew something was on, I have a freedom in myself. No last three holes in pursuit of a historic round in a US Open are as worrying as not being able to keep it on the golf course, to not knowing where it is going. I can always take a moment when things are going well, when pressure might build, to think: ‘You’ve had a lot worse than this.’”

There is no current need for dark thoughts. Fleetwood and Woods is the marquee pairing for round one of this week’s Tour Championship at East Lake as just 30 qualified competitors joust for huge sums. Woods, the 14-times major winner, has stated his admiration for Fleetwood, whom he partnered for the first time at this year’s Masters. Far from being intimidated, the Briton comfortably made the Augusta cut.

“We were drawn together again at the Northern Trust and I played really well there,” Fleetwood says. “I was happy about that one because I’d been asked who my favourite person to play with. I said Tiger. Whoever asked me was like: ‘Really?’Generally people might think: ‘This is Tiger Woods’ or the crowd might put you off. I said it after the Masters, I really enjoyed it and I wanted to do it again.

“People say he has opened up a little bit now and that he is easier to talk to. When he was in his pomp he was ridiculous, wasn’t he? I can definitely imagine what that was like. There’s very few people on Earth that I feel are intimidating characters as grown men so I don’t know how I would have felt about playing with him [THEN], but he definitely had that. He still probably has it but I think people have got more used to him. He sits in the players’ lounge and talks away so it is not like an unknown entity when you are going to play with him. He is a nice guy to be around.

“You’ve got to say playing this week is a really, really good achievement. As much as I’ll be trying to win, I’ll have ticked off a goal. Hopefully I’ll play with a bit of freedom looking towards the Ryder Cup.”

Discussion between the pair presumably will revert towards next weekend and Le Golf National. Woods’s own renaissance means he will form part of the USA team as they seek to retain the trophy won two years ago at Hazeltine.

Fleetwood will face an American team for the first time since he was an 18-year-old in 2009, Rickie Fowler then among the home contingent who dished out a heavy beating to Great Britain and Ireland in the Walker Cup at Merion.

“You don’t know when you are going to see those guys again but you are going to see some of them,” Fleetwood says. “It has taken me a while but that was a big motivational thing for me. They were definitely better than us at so many things, plus it was in America. But I’m glad it was because a lot of the time when we played at home the odds were stacked in our favour with the type of golf played. If you win that, maybe it’s not quite the same as getting beaten and using it as fuel.”

It is little wonder, then, that Fleetwood will take stock on Friday week. His first, vivid Ryder Cup memories are from 1997, when Seve Ballesteros’s side won by a point at Valderrama. “I have obviously watched them all since, you just get a passion for it,” he says.

“When it is on, the Ryder Cup is by a country mile the biggest sporting event in the world. We get the chance to play in that. It has 100 per cent been a massive goal in my life. Teeing off on the first will be ticking off a lifetime goal; so will being on a winning team, whether that is this year or not.”

Fleetwood has earned the right to nurse the dream. His story remains an inspiration.