Dustin Johnson on the verge of history in Shanghai

World number one set for third WGC win of the year, Paul Dunne can push for top-10 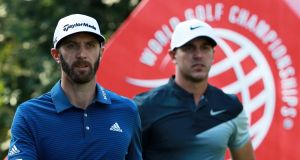 World number one Dustin Johnson is on the verge of making history after opening up a six-shot lead in the WGC-HSBC Champions event in Shanghai.

Johnson carded an eventful third round of 68 at Sheshan International to finish 17 under par, with nearest rival and good friend Brooks Koepka collapsing to a 73 after a brilliant start.

Former Open champion Henrik Stenson is seven shots off the pace after a 69, with Olympic champion Justin Rose and Brian Harman a stroke further back on nine under.

Meanwhile Paul Dunne’s hopes of a top-10 finish are firmly alive after he carded a third round 70, leaving him tied for 12th.

The Greystones man is now six under par for the tournament, after a making three birdies and dropping just the single stroke on Saturday.

Victory for Johnson on Sunday would make him the first player to win three World Golf Championship events in the same year after he won the WGC-Dell Technologies Match Play and WGC-Mexico Championship on back-to-back starts in March.

“These are big events, some of our biggest events we have on tour and obviously the best players in the world are here,” Johnson said.

“It’s golf tournaments that I obviously always want to put myself in position to win, which I’m in a good position going into tomorrow. But I’m still going to have to go out and play a really solid round if I want to get it done.”

Johnson began the day with a one-shot lead, but bogeyed the first and saw Florida neighbour Koepka start with three straight birdies to move two shots in front.

However, Johnson birdied the fourth and seventh to get back on level terms before a decisive swing on the eighth, where Johnson picked up another shot and US Open champion Koepka lost a ball in the trees and ran up a triple-bogey eight.

It was Johnson’s turn to find trouble on the 10th when he needed two attempts to get out of the bushes on his way to a double-bogey six, but the damage was limited by Koepka also dropping a shot.

Three birdies in the next six holes then saw Johnson stretch his lead and remain firmly on course to repeat his victory of 2013.

Koepka, whose unhappy day was completed with a bogey on the 18th, said: “There were five holes that were just a disaster there from eight to 12. Nine was all right but 10, to put that wedge shot in the bunker was pretty poor, especially when you’ve got so much room.

“The start was really good. The first seven holes I thought was pretty solid and the rest of it very up and down.”

Stenson’s 69 was his third sub-70 round of the week, but the world number nine admitted he would have his work cut out to catch Johnson on Sunday.

“My game plan is going to be the same,” Stenson said. “I’ve got a game plan how to play my best, or what I think is my best on this golf course and I’m going to stick to that. It’s been working pretty good so far.

“But if Dustin keeps on playing the way that he’s done this week, I think it’s going to be a one-man show tomorrow. But you never know, tough winds, and this golf course has a couple of holes where you certainly can have a number. It’s never over until it’s over.”

Man United could stop Bruno Fernandes from playing for Portugal in March 09:31
Another stalemate for Man United; Robbie Henshaw leading the way for Ireland 07:54
Continued absence of anti-doping tests for GAA intercounty elite 06:44
Irish contribution to Ali-Frazier bout that brought the planet shuddering to a halt 06:00
Her Sport putting women’s sport firmly centre stage 06:44
Here is your handy guide to sport on television this week