Shane Lowry diary: Stuff of dreams to have Wendy and Iris in Abu Dhabi

To win on my first week out in 2019 was perfect, I couldn't have scripted it any better 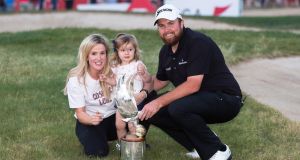 It’s so nice to get a snapshot of what my win means to others.

My aunt sent me a video of the scenes in my parents’ house where they’d all been watching on television and, after I’d sank the winning putt, the clearest thing I could hear was my dad asking ‘Where’s Iris? Where’s Iris?’

He was looking out for her, because he knew what having my daughter there meant to me.

I’ll be honest. As soon as we had Iris, that’s what I’d dreamed about. To have both Wendy and Iris in Abu Dhabi as I won was just dream stuff, something I wouldn’t really let myself think about until it actually happened because you’d only get emotional thinking about it.

But ever since Iris was born – she’ll be two in March – that’s one of the things I’d always hoped for, for them to come out to me on the 18th green at a tournament. Because that would mean only one thing. I was a winner.

And there were times I’d wondered if I would win again. When I won the WGC -Bridgestone Invitational in 2015 I didn’t think I’d have to wait three and a half years for my next win.

Obviously, I’ve had great chances to win since then, especially at the 2016 US Open in Oakmont. Not winning that time shouldn’t have been such a setback but it felt that way to me. It was something that took me a while to get over.

I’m not sure I ever fully got over it and, to be honest, if I didn’t finish the job off on Saturday it would have hurt a lot as well.

The last couple of years have been tough enough on the golf course. Juggling the US Tour and the European Tour didn’t suit me at all. I lost my card last year in America and that made the decision for me to come back to Europe.

I had no other choice really. And that’s why I was in Abu Dhabi; and to win on my first week out, I couldn’t have scripted it any better.

I was frustrated for much of last season. You play golf and you think you are playing well and the results aren’t happening for you. You start to doubt yourself an awful lot, and that’s what I’d been doing.

I got a bit of confidence from the end of last year – that top-10 in Portugal and finishing runner-up to Sergio in Valderrama – and I used that over the winter to refocus. I did more work in the gym that I normally do and I went out and hit more golf balls than normal.

We came out early to Dubai, had a couple of great weeks training and playing practice rounds. Myself and Paul Dunne rented a house on The Palms and Jamie O’Connell, a guy from Meath who is at the Butch Harmon School, looked after us. We practiced most days and it showed me going forward what I need to do and what works for me.

But golf’s a weird game because, in all of the matches I played against Paul, I didn’t win one of them. They were ding-dong matches and I lost a few on the 18th. But I knew I was playing well going into the tournament and look what happened: I shoot 62 in the first round and then do what I do in the final round and Wendy and Iris are running out to me on the 18th.

The stuff of dreams.

My main goal for the next 18 months is to make the Ryder Cup. I am not going to shy away from it, not going to talk it down or whatever. That’s what I want to do. I set myself a target of being well inside the top-50 in the world by September and being in all the big tournaments for when qualifying starts so that I can focus on getting as many points as I can and to play my way into the team. That’s my goal for the foreseeable future.

If I make that team, the other goals will be hit along the way. I have to win again, to contend in the Majors and do well in the big tournaments. That’s the way I am looking at the next 18 months.

Obviously my win in Abu Dhabi is a huge stepping stone, because it gives me a jump up the world rankings to 41st and it changes my schedule.

When I sat down at the start of the year I included Oman, Qatar and Malaysia on my schedule and I was really looking forward to going to those places.

But this win changes things and I will be playing the WGC-Mexico, The Players, the Dell Matchplay, the Masters, the US PGA. All of these big tournaments will come thick and fast. I’ll also likely add in the Arnold Palmer Invitational at Bay Hill.

I’m not playing them to get my PGA Tour card back, I am playing them because they are the biggest tournaments in the world at that time and I am lucky enough to be in them.

First up, is this week’s Dubai Desert Classic. If anything, the win in Abu Dhabi is going to take the pressure off me and hopefully that will lead to some good golf as well. I’m conscious that I want to enjoy this latest win. I felt like when I won the Bridgestone there would be another one soon . . . . and I had to wait three and a half years!

We’d a bit of a party on Saturday night, nothing too wild, just trying to soak it all in, and then, with the extra day, went out with some of the lads to watch the Leinster match on Sunday. I went and hit some shots on Monday to get some of the cobwebs off, and I’ll be ready to go at it all over again come Thursday’s first round.

The Emirates course is similar in a lot of ways to Abu Dhabi. It’s mainly a right-to-left course which suits me.

This game is funny. Once you’re playing with a lot of confidence the bad shots don’t faze you. Hopefully I can ride the wave from here and kick on . . . . and put myself there on Saturday and Sunday again and give myself a chance. I know how hard it is to win on tour, but I don’t want to be waiting three and a half years again.

Burnley hold out Crystal Palace for first win of the season 19:40
Giroud remains part of Chelsea plans, says Lampard 18:25
Crowds of 4,000 to return to sporting events in England from next week 17:32
Former Ireland assistant manager Maurice Setters has died aged 83 17:06
Davy Russell on neck injury: ‘it was a very close one and I dodged a bullet’ 17:00
Here is your handy guide to sport on television this week