Shane Lowry: New putting grip a major change for me 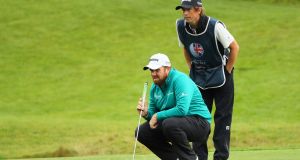 Shane Lowry lines up a putt on the first green during the fourth round of the British Masters at The Grove. Photo: Andrew Redington/Getty Images

In some ways, I’m a creature of habit. I’m loyal, don’t really like to change things. So the decision to change my grip and my putter wasn’t an easy one to make.

But the more I thought about it, the more necessary I felt it was to make the change and I must say I’m happy and committed to it and especially after reappearing on tour at the Dunhill Links and the British Masters.

I have been putting cross-handed for nine years and had been getting frustrated of late with failing to hole out putts when it mattered most.

I needed a change and, during the five weeks that I was free after the PGA and knowing that the Ryder Cup wasn’t in my plans, I decided the time had come.

I put the suggestion to my coach, Neil Manchip, and he was happy for me to make the change as long as I was properly committed to it.

During that break from tour life, I spent a lot of time down on the putting green on my own. Putt after putt after putt. I’m happy with what’s come out of it and I’m going to stick with it going forward and see how it goes.

I’m putting with a lot more feel than I used to have, it’s less mechanical than my old method and more natural, more the way I play my golf.

It just feels better, more enjoyable, although of course I would have preferred a better finish than slipping down the field on the final day for a tied-41st.

I’d gone out believing an eight-under round could get me contending, or a five- or six-under round would get a top-five. The last seven holes of the tournament I fell away badly, two double-bogeys ruining much of my card. It was just one of those days when nothing went for me.

Honestly, though, I played some good golf and I feel like things are trending in the right direction.

I know you look at results when you’re finished a tournament but, if you take the result away from last week, it was pretty successful and, coming on the back of getting a card back in my hands at the Dunhill, which was an enjoyable week, I am excited about the weeks ahead.

Neil was on my bag for the British Masters but Dermot Byrne, my regular caddie, is back on the bag for next week’s WGC-Champions tournament in China and for the rest of the season.

I’m one of the speakers at the OneZero conference in the RDS tomorrow and am back on the plane on Sunday for a flight to China for the WGC which is a massive tournament.

In the past I’ve found back-to-back weeks in China hard to deal with, and I haven’t played particularly well in the event although I do believe the course suits me, so it’s good that it is only a one-week visit this time and then moving on to the Turkish Airlines Open.

I’ve four rounds in China, four rounds in Turkey and four rounds in Dubai before playing with Graeme McDowell in the World Cup in Australia. I’ve effectively got 16 rounds of competitive golf left this year and I’m going to try and make the most of it.

1 Maradona’s terrible, terminal journey from human to myth divided him in two
2 Autumn Nations Cup - Ireland v Georgia: TV details, kick-off time, team news and more
3 Fear won’t be a factor as Waterford get their licence to thrill
4 All bets are on as America opens the gambling sluice gates and the dollars flow
5 Gordon D'Arcy: I know what Joe and Cheika would do. Fix the basics
Real news has value SUBSCRIBE