Shane Lowry: Darren was right. I didn’t perform when it mattered 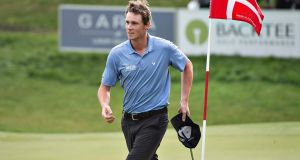 Thomas Pieters: his victory in ‘Made in Denmark’ proved key in clinching his Ryder Cup place. Photograph: Henning Bagger/AFP/Getty

How will I put this? I’m the one on the receiving end of a phone call at home on Monday afternoon and it’s a private number. Straight away I know it’s from him. I look over to my wife Wendy, and I answer the call. Immediately I tell from the tone of Darren Clarke’s voice that it’s not good news, that I won’t be part of Team Europe at Hazeltine.

I’ve spent much of this season playing golf with the Ryder Cup as one of my main goals. By not making the team automatically, the control has been taken away from me.

I listen to what Darren says and I accept it. He said he couldn’t pick me with everything that was after happening in Denmark at the weekend, that my own form over the last couple of months hadn’t been good enough. He told me he’d wanted me in the team all year, that I didn’t perform when I needed to.

And, at the end of the day, it’s my own fault. Darren was right. I didn’t perform when it mattered.

I know I am good enough to play in the Ryder Cup. I know I’d definitely bring a lot to the team and to the team room.

I was disappointed after the call, and obviously I wish the team the best of luck, but I couldn’t get rid of the feeling that not much has gone my way since finishing runner-up in the US Open at Oakmont.

If there’s been a bad break going, it would find me. It’s been a tough few months. I’m getting used to it.

Yes, I was disappointed at not making the team; but it’s not the end of the world. Since Oakmont, the Ryder Cup has been on my mind a lot. It’s been like a cloud hanging over me and I just never got momentum.

Here and now I’m making a vow to myself that I will make the team for Paris in 2018 by myself, so that I don’t need any pick. I’ll put my hands up too and admit I made some mistakes scheduling-wise this season. I played a lot in America, a lot of new courses and new tournaments, and people underestimate how difficult that is. You’re playing against guys who’ve played these courses for 10 years. It’s simple things, like standing over a wedge shot to a blind green and not knowing if the ball releases on the green. It reminds me of my first year in Europe, it took me a while to get used to the courses.

I probably didn’t perform to the best of my ability this year but it will stand me in good stead going forward next year and the year after.

Still, when you look at the players that were in contention for the wild cards, Thomas Pieters and Russell Knox, I realise I was a bit outside it when the decision-making came to a head.

What’s very disappointing as well is that the FedEx Cup goes on without me playing any part in it. I made the decision to play in Denmark hoping to make a final push for a Ryder Cup spot but I honestly thought I’d be in the field for the Deutsche Bank championship in Boston. I was 87th in the standings going into the Barclays – which I missed in favour of Denmark – and didn’t think I’d drop down 15 places.

The really frustrating thing for me is that I felt like I played well at the Wyndham championship, when I made 20 birdies that week but also had a few too many mistakes. I really felt if I’d played the Barclays I would have done okay and definitely would have been in Boston.

Do I regret going to Denmark? If I didn’t go, I’d always be thinking ‘what if?’ I regret going now, though, because I am not in Boston and I have missed out on the chance to play the FedEx Cup. But I went to Denmark trying to make the Ryder Cup team and I gave it my all. The plan backfired on me. I feel like things have been going against me the past while, so I’m going to take five weeks off and probably won’t play again until the Dunhill Links. Hopefully, I’ll have recharged the batteries by then.

Thomas Bach to stand unopposed for re-election as IOC president 11:57
Sexton and Henshaw return to training ahead of Scotland clash 11:01
Criticising Daniel Dubois for stopping his fight ‘dangerous and irresponsible’ 09:57
Lewis Hamilton to miss Sakhir Grand Prix after positive Covid-19 test 09:30
Pumas captain Pablo Matera suspended over racist posts 09:06
Here is your handy guide to sport on television this week