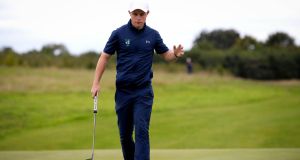 Conor Purcell – the son of Joey, the former longtime club professional at Portmarnock – showed his rich golfing pedigree with a victory in the Australian Amateur Championship at Woodlands Golf Club, in the renowned Melbourne sandbelt region.

The 20-year-old Dubliner – the first Irishman to win the famed title – needed an extra hole of sudden-death to defeat Australian Nathan Barbieri, after the pair finished all-tied after 36-holes of regulation which saw the pair produce no fewer than 17 birdies in a high-quality finale.

Purcell – who had his brother Gary on his bag – finally finished the job at the first extra hole, earning the bonus of invitations into the upcoming Victoria Open on the Australian PGA Tour and the Australian Open next December as part of his rewards. He was also bestowed with honorary membership of the Woodlands club.

It was the perfect start to the new season for Purcell, who will be one of the favourites when the Amateur Championship takes place on his home course at Portmarnock in June. He also made an early claim for a place on the Britain and Ireland team for the Walker Cup match against the United States at Royal Liverpool in September.

“The last few holes were a bit edgy, but to cap it off on the playoff hole was nice,” said Purcell, who had the trophy presentation played live via Facebook to his parents back in Malahide.