Shane Lowry: I’ll make sure I make the next Ryder Cup 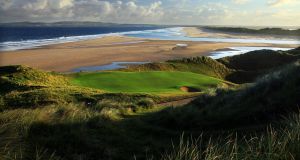 The 16th hole at Tralee. I’d never played either Tralee or Waterville and it was a real treat to finally get to play two of the finest links courses in the world. Photograph: David Cannon/Getty

I was watching the All-Ireland football final on television with The Gooch on Saturday. “I should be there, and you should be in America this week,” he said.

He wasn’t, and I wasn’t. Such is life, but there’s no doubt the Ryder Cup was in my head over the weekend and that was one of the reasons I planned a get-away with a few friends down to Kerry: a bit of links golf, a bit of craic; and much better than me moping around the house thinking about Hazeltine and what was going on there.

When I didn’t make the Ryder Cup team, I decided there was no point in me hanging around the house. Eight of us went down to Kerry and we played Tralee on Saturday and Waterville on Sunday. It turned out to be the perfect weekend to do it. I could play golf during the day and watch the Ryder Cup at night and cheer on the lads with one part of me thinking I should have been there.

Believe it or not but I’d never played either Tralee or Waterville and it was a real treat to finally get to play two of the finest links courses in the world.

In the week that was in it, it was nice to play Tralee which of course is the only links course designed by Arnold Palmer. We did the touristy thing and got our picture taken beside the statue of The King at the links but it was also fitting to do that because he was probably the first real superstar in golf and, as tour players, we owe a lot to him. I always feel the same way about Tiger Woods, because he has also increased golf’s profile and led to bigger sponsorships of tournaments.

Playing Tralee and Waterville was actually ideal preparation for me ahead of this week’s Dunhill Links. It meant I got to play links golf, which was great, but it was also just a lovely weekend. I was playing Waterville on Sunday when who should appear in a buggy but Mick O’Dwyer. What a legend! He followed us for a few holes and it was just great to meet up with him.

I didn’t realise Kerry folk were still so bitter about the Séamus Darby goal in that All-Ireland of ‘82 which my dad played in. A little push in the back over 30 years ago? It was amazing. I couldn’t go anywhere without it being mentioned. All a bit of craic of course but it was also nice to meet up with Colm Cooper, Jack O’Connor and a few of the Kerry greats. As I said to Gooch when he made his comment, “I’ll make sure I’m at the next Ryder Cup.”

I’ve had five weeks of a break during which time myself and Wendy had our belated honeymoon. It has been a lovely break which came at the right time in terms of clearing my head and getting ready for the rest of the season. I’m itching to play golf again which is the one thing I wanted to get out of the break. I’ve six tournaments coming up to finish the season. I want to kick on and turn it into a really good year.

My schedule from now on this the Dunhill Links and next week’s British Masters, a week’s break and then the WGC-HSBC Champions tournament in Shanghai and the following week’s Turkish Airlines Open. Then, another week’s break followed by the DP World Tour Championship - which finishes the Race to Dubai - and finally the World Cup in Australia, where I partner Graeme McDowell and would really love to go down there and do something special.

I’ve decided to skip the Nedbank Championship in Sun City, which is the penultimate tournament in the Race to Dubai, simply because I feel going China-Turkey-South Africa-Dubai-Australia in successive weeks is just too much travelling on the body, especially at this time of the year.

Scotland’s a lot closer. I’m playing with Gerry McManus in the team side of the Dunhill Links. I’ve had five weeks off so I could be just a little bit rusty but the forecast is for not much rain and windy conditions so I feel I can do well. We’ll be playing with Jamie Dornan at Carnoustie, AP McCoy at Kingsbarn on Friday and with Brian O’Driscoll at St Andrews on Saturday. Funny how these “draws” work out.

I’m looking forward to playing links golf. I’ve done well in the Dunhill - a best of third in 2013, a top-10 two years ago and a top-20 last year - and it is a tournament I’ve played every year since turning professional . I’m going to go out and give it a go.

Knockout All-Ireland could be the way forward; Gerry Thornley on Ireland’s lineout 07:27
Eoin Morgan: More than England’s captain, Dubliner is the team’s touchstone 06:00
Gerry Thornley: Ireland don’t want to box themselves into a corner 06:00
Kevin McStay: Maybe a knockout All-Ireland Championship is the long-term solution? 06:00
Successful year for Stephanie Meadow takes her to LPGA event 06:00
Here is your handy guide to sport on television this week