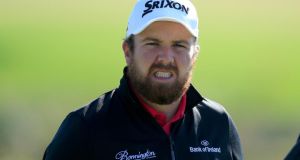 Shane Lowry: “The way I see it is that I have to give myself every chance of making the team. If I didn’t go to play in Denmark, I’d be thinking, ‘what if?’” Photographer: David Cannon/Getty Images

I hope my sense of direction is better on the golf course. I drove to the wrong golf club here in Greensboro yesterday, which hopefully isn’t any sort of omen.

I was the one in the driving seat, so I couldn’t even blame my caddie Dermot Byrne – who often takes control of the wheel – for ending up 20 miles away from where I was supposed to be, at Sedgefield Country Club.

The Wyndham Championship is the last of the so-called “regular” events on the PGA Tour for the season before the FedEx Cup Playoffs start with next week’s Barclays Championship.

The reason I’m here in North Carolina, though, is to try and make a late play to make Europe’s Ryder Cup team.

I know exactly where I stand in the qualifying tables – 14th in one, 16th in the other – and the reality is that I probably need a win this week or in Denmark next week if I’m to have any chance of making it to Hazeltine. To do that, I need to improve my results.

When things are not going your way, stuff happens; when you’re going well, it doesn’t.

I was cruising, had a bad three-putt for bogey, which wasn’t the end of the world, and then got a flyer on the next hole and double-bogeyed. It was too late in the round to retrieve things and it meant another missed cut.

I was really disappointed because the leaders were so bunched that I felt if I’d made the cut I’d have a chance over the weekend.

Golf doesn’t give you anything, it can be so unfair; but that’s the way it is, that’s the game I play.

And Russell Knox winning didn’t do me any favours either as far as the Ryder Cup is concerned. Good luck to him, he’s made a bid for the team. But if I do the business this week or next, hopefully I’ll give Darren Clarke and the lads something to think about.

I’m going to play the Made in Denmark tournament next week, which is the final qualifying event for the European team, and so will miss out on the Barclays.

The way I see it is that I have to give myself every chance of making the team. If I didn’t go to play in Denmark, I’d be thinking, ‘what if?’ and I don’t want that.

I watched the finish to the Olympics on television on Sunday and there was a part of me wished I was there.

I think it was good for the Olympics going forward that we had players like Justin Rose and Henrik Stenson going at it down the stretch and hopefully I’ll be there in 2020 in Tokyo.

Anyway, I’m focused on the Wyndham this week.

It’s my first time here at this tournament and what’s struck me most since getting here on Sunday is the heat.

I’m not kidding when I compare it to Malaysia. It’s extremely hot here but I like the golf course, it’s very old-styled and tree-lined with narrow fairways and the rough is not too thick.

The greens are fast and slopey and good to putt on. I expect there’ll be a lot of mid-irons – five to nine – in the coming days.

I didn’t have a pro-am to play in yesterday, which meant I could focus on my short game and a lot of time on putting.

I know I’ve been saying for some time that I’d love to kick-start the year but I make no apologies for saying it again.

There’s a lot to play for in the coming weeks and months and I’d absolutely love to get things moving in the right direction sooner rather than later. There’s still time to turn things around.

1 Diego Maradona dies of heart attack, aged 60
2 Keith Duggan: Through the glories and the disgraces, we were all Maradona addicts
3 Darragh Ó Sé: Cork and Donegal went out with the wrong attitude
4 Andy Farrell to delve deeper into Irish squad for team to play Georgia
5 Gordon D'Arcy: I know what Joe and Cheika would do. Fix the basics
Real news has value SUBSCRIBE