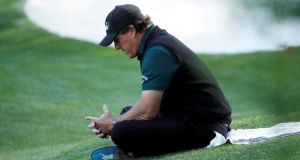 Mickelson got caught on camera with his competitive flies open. An elite sportsman in pursuit of the one big prize that has eluded him through a gilded career saw his chances of victory disappearing down the green. Instinct took over. Photograph: Getty Images

Trump will probably get blamed. If the world’s most famous hack golfer gets away with slipping standards why not the game’s professionals. For once golf looks in tune with both the times and the rest of sport. It’s superiority complex bluff has been called.

Even those of us who don’t know our “mashies” from our “mulligans” were recently treated to the sight of golf lifting its skirts over Phil Mickelson’s apparent gamesmanship at the US Open. He hit a moving ball on a green. If he’d hit a moving kitten with a blunt child there could hardly be more outrage.

Breaking the rules by God. And he tried to squirm out of it, initially arguing frustration when most twigged straight away the American did a fast mental tot and calculated any two-shot penalty would be less than letting the ball roll off the green.

But justice was done. Mickelson chanced his arm and got penalised two shots. Nothing to see here. Nothing, of course, except the sound of golfing indignation in full voice.

For breaking the rules, but more importantly breaking the spirit of the game, Mickelson should have been disqualified, booted off the course, suspended indefinitely, rocketed to Mars: a lot of very nice people have been very disappointed with Phil and more are just plain angry.

You can argue it reflects golf’s ethical standards. This is the sport very proud of regulating itself, where honour isn’t just a cliché. It’s the game where players call fouls on themselves. So do snooker players mind you but they haven’t built such a self-regarding culture out of it.

That’s why it’s easy to point at the scale of outrage and recognise it for what it is – a reflection of golfing sanctimony and it’s unbearable smugness of being.

You see there’s a reason Trump loves golf. If you’re an arrogant bully with more money than taste and a reflex need to dominate there’s no greater confirmation of your prejudices than the golf course. Because it’s never been the cheating that counts in golf. It’s the getting caught.

That was Mickelson’s big sin. He got caught on camera with his competitive flies open. An elite sportsman in pursuit of the one big prize that has eluded him through a gilded career saw his chances of victory disappearing down the green. Instinct took over.

Probably the same instinct was lurking afterwards when he advised a mostly indignant golf media to toughen up. They were all about the spirit of the game yet found themselves getting a glimpse of the competitive drive inside a man often accused of just being that little bit too “aw shucks” to be true.

Well the truth is that elite sportspeople are driven. Some are just more adept at disguising it than others. It’s no big sin that Mickelson’s public face doesn’t appear as sincere as Rory McIlroy’s. Much more significant is how the Irishman and most other pros dismissed the incident as no big deal.

Because as sporting sins go Mickelson’s was negligible. It was like nicking a yard or two taking a free in GAA. Or hanging a leg out to be kicked in a soccer penalty area, maybe even accidentally on purpose getting in the way at a ruck.

This is the reality of top class sport. No one’s pretending it’s savoury. But it happens. What Mickelson did proved golfers are as prone to the same human impulses as other sporting figures.

That’s probably why his action resonated so much because it tunnels underneath the foundations of golf’s perception of itself as being better than that. Which in turn is why golf, and the smug self-satisfaction it seems to conjure so effortlessly sticks in so many craws.

Because any moral superiority golf assumes is of the glib variety. It can’t be anything else when so much of the game’s culture is predicated on a dubious cocktail of isms pandering to exclusion and snobbery. Managing to keep your own score card is a pretty light counter-balance to such posturing.

Golf and its sanctified rule book are not some magic antidote to human toolery, even if the mock outrage that greeted Mickelson’s wide-boy move suggests it’s got some magic elixir that inoculates against any impulse to pull a fast one.

Such posturing is ludicrous considering how the very nature of the game lends itself to attracting more than its fair share of dickish shysters. Golf, like any other sport, reveals character rather than builds it. What Trump got away with in golf he’s now trying to get away with in power.

Golf has bigger problems to address than one of its biggest stars having a brain-fade and indulging in a little nod-and-a-wink chicanery.

For instance years of affecting to believe its elite players couldn’t possibly be cheating with performance enhancing drugs (PEDs) means it is now playing a less than wholly convincing game of catch-up in terms of dope testing.

It must go against the grain to have to acknowledge a need to blood test players as if they were footballers or athletes since PEDs are widely presumed to be a problem for other sports. The odds are such presumption is wrong. But when the big sin is the getting caught you can afford to presume.

It’s of course laudable to see most elite golfers behave admirably when it comes to both the rules and the spirit of the game. What that doesn’t do is justify the sort of self-congratulation that makes Mickelson’s sly move a hanging offence.

But since self-congratulation is one of the defining characteristics of our time it probably really is Trump’s fault.