Rory McIlroy back in the hunt after US Open disappointment 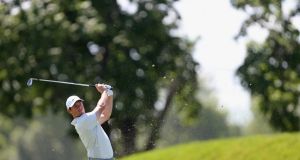 Rory McIlroy of Northern Ireland watches his second shot on the ninth hole during the first round of the Travelers Championship at TPC River Highlands in Cromwell, Connecticut. Photo: Matt Sullivan/Getty Images

After a third missed cut in as many years at the US Open last week it was a different Rory McIlroy who pitched up at the Travelers Championship in Connecticut with his game-face on, firing a first round 64 to sit at six under, one off the lead held by Jordan Spieth and Zach Johnson.

It’s four years now since McIlroy last won a Major championship and, with just two left this year before the long wait until next year’s US Masters, some good form has to come soon.

On Wednesday he said that he was using the missed cut to his advantage – “Some guys endured that mental test for four days last week, and some others like me endured it for two rounds” – and on Thursday it looked like it was working.

On the first day at TPC River Highlands he came flying out of the blocks like a man with a point to prove by launching a 310-yard drive down the hole, flipping a wedge in to 10 feet and sinking the putt for a birdie.

Three more would follow at the second, the fourth and the sixth to move McIlroy to four under through six.

McIlroy made his first ever appearance in this tournament last year where he made the cut on the mark before posting a Sunday 64 to earn a top-20 finish. This year it will be his final appearance in America before heading back to Ireland where he will host the Dubai Duty Free Irish Open next month and then move on to the British Open at Carnoustie – the title he won in 2014.

After getting to four under through his first six, good birdie chances would pass McIlroy by at the ninth, 11th and 12th after some good approach shots.

However, he made no such mistake at the Par 5 13th where he speared a drive straight down the fairway, laid up to wedge range and spun his approach in to four feet before sinking the putt to get to five under.

He followed it with two more birdies at the 14th and 15th to jump into a tie for the lead but a disapointing bogey at the 18th saw him go into the second round one behind Spieth and Johnson.

If McIlroy is coming in for some questioning after his recent form, Spieth is being grilled over his unusually poor putting. On Thursday he put a lot of those questions to bed with birdies at the third and fifth, an eagle at the sixth and further birdies at the 11th, 13th and 14th to join Johnson at seven under. A bogey at the 15th set him back but he replied straight away at the 16th to card a 63 and leave himself perfectly poised to reclaim the title he won in dramatic fashion last year.

Meanwhile, Pádraig Harrington made the most of the early morning conditions by carding a bogey-free round of 66 to sit three off the lead.

The Dubliner will also be at the upcoming Irish Open in Ballyliffin and he found some much needed positives on the first day in Cromwell. An excellent up and down at the Par 5 sixth after missing the green way right got him under par and he followed it with a birdie at the next.

A two at the Par 3 11th added to the tally before another birdie at the 15th and three pars to finish saw him in at four under par with no blemishes.

Leader Zach Johnson launched a scathing attack on the set up at Shinnecock Hills after the third round last week and he obviously found this week’s regular tour stop much more to his liking as he carded birdie at the fourth and fifth before hitting a run of six in a row from the 11th to the 16th. A bogey at the 17th and a par to finish saw him sign for a 63.

The third member of the Irish trio in the field – Waterford’s Séamus Power – endured a very mixed bag in the opening round with six birdies, six bogeys and six pars eventually adding up to a level par round of 70.

First round scores in the Travelers Championship, par 70:

*(a) Indicates player is an amateur