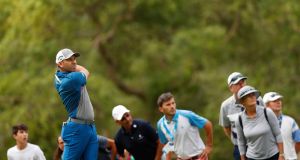 Spain’s Sergio Garcia of Spain hits his second shot on the 17th hole during the first round of the Andalucia Valderrama Masters at Valderrama. Photograph: Warren Little/Getty Images

Sergio Garcia’s love affair with Valderrama shows no signs of abating after the tournament host made a flawless start to his bid for a fourth straight win in the Andalucia Masters.

Garcia first claimed the title in 2011 before it dropped off the European Tour schedule for five years and he then won in both 2017 and 2018, when bad weather meant a 54-hole event and a Monday finish.

In total the former Masters champion has recorded an incredible 13 top-10 finishes in 14 appearances at Valderrama and a bogey-free 66 in Thursday’s opening round left the 39-year-old just a shot off the lead held by France’s Victor Perez.

“I love this place, there’s no doubt about that,” said Garcia, who has missed the cut in three of his last four starts and said he “looked like a 25-handicapper” during the recent US Open.

“Today was a great round, probably the best I’ve felt in quite a while. Even though the conditions were great – there wasn’t much wind and this course is so pure – you still have to hit the shots in the right places and to be able to go bogey-free here it’s always a treat.

“It [Valderrama] kind of has something that helps me. It was a great first round but it was just the first round, we have to keep building on that and we’re looking forward to a good week. You’ve got to go one step at a time, there’s a lot of golf to be played.”

Perez, who has missed the cut in four of his last five starts, carded six birdies in a bogey-free 65 to lead by one from Garcia, Anton Karlsson, Christiaan Bezuidenhout, Sihwan Kim and Gavin Green, with world number 11 Jon Rahm three shots further back following a 69.

“Two under par is a great round and hopefully I can come out early in the morning and do what the leaders did and shoot something low,” Rahm said after a round containing an eagle, four birdies and four bogeys.

“I think it’s my first round under par here in a tournament. It feels good coming out of Pebble [Beach] playing some solid rounds, I just hope I can keep that going and avoid the few mistakes I made today.”

The three Irish golfers in action all finished over par after their opening rounds, with Gavin Moynihan the best of them after carding a one-over 72.

Michael Hoey signed for a three-over 74, while Paul Dunne was a shot further back after a 75.

On the US PGA Tour, Ireland’s Séamus Power dropped down the leaderboard after carding a closing double-bogey six at the Rocket Mortgage Classic in Detroit.

Three birdies and a lone bogey on his front nine got Power to two under, but he suffered a second bogey on the 10th hole and went back over par with his six on the final hole as he signed for a one-over 73.

American Nate Lashley blazed a trail to the early clubhouse lead after a nine-under 63 that included five birdies in his last six holes.