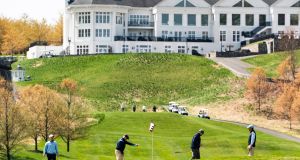 Golfers play a round at the Trump National Golf Club in Sterling, Virginia on April 11th. Though Virginia Governor issued a stay-at-home-order for residents of the state until 10 June to help stem the spread of the coronavirus Covid-19 pandemic, the state is allowing golf courses to remain open as long as players practice social distancing. Photo: Jim Lo scalzo/EPA

Stephen Moore appeared on the Today programme on Tuesday morning to talk about the US protests against the lockdown. Moore, who is a member of Donald Trump’s economic recovery taskforce, made headlines recently with his radioactively obnoxious opinion that the people out complaining about physical distancing are modern-day equivalents of Rosa Parks, a comparison that makes you wonder whether earplugs ought not to be considered an essential bit of PPE.

“People are protesting against their basic civil liberties and constitutional rights,” he told the BBC, getting his for and against in a muddle. “People in many states feel politicians are trampling on those rights.” It was, Moore said, especially tough in his own home state of Maryland “where they won’t even let you play golf by yourself”.

May God forgive the impingement on his unalienable right to life, liberty, and the pursuit of birdies. The absurdity of it is that when they come to write the history of these past few weeks they will have to set aside a couple of paragraphs to explain where the game of golf fitted into this mess, since Trump has spent so much time out on the course himself.

He seems to have played every other weekend since the global crisis started, on January 18th and 19th, February 1st, 2nd and 15th and March 7th and 8th – this last round while thousands of people in quarantine on board the Grand Princess were stuck waiting to find out whether he would let them off or not.

As the singularly dismal president Warren G Harding once said: “I may not know everything about being president, but I do know that a lot of decisions can be made on golf courses.” Ronald Reagan, after all, took the decision to invade Grenada while he was playing a round at Augusta National.

The only president who has ever really understood how a golf habit comes across to the public was John F Kennedy. Early in July 1960, the very same week he was nominated to be the Democratic candidate for the presidency, Kennedy was playing Cypress Point in Monterey. At the par-three 15th he hit a fine five-iron off the tee and watched the ball land on the front left of the green and kick straight on towards the hole.

“Go in. Go in,” cried Kennedy’s friend Paul Fay. But Kennedy begged for his ball to miss. He let out his breath when it stopped six inches short. “If that ball had gone into the hole,” he said to Fay, “in less than an hour the word would be out that another golfer was trying to get into the White House.” Kennedy was so rattled he asked Fay what it would have cost in hush money to keep the two caddies quiet.

They say Kennedy was the best player among all the presidents, just a whit better than his predecessor Dwight Eisenhower, “and if Kennedy played as often as Eisenhower did”, AP once reported, “there’d be no contest”. Eisenhower had played 800 rounds in the eight years he was in office, had a practice range installed in the White House basement and a putting green outside his office door. When Kennedy finally moved in he found that the wooden floor of the Oval Office was pitted with cleat marks.

Which was precisely why Kennedy didn’t want anyone to know he played, too. So he tried hard to keep it secret. He would skip the holes that passed closest to the clubhouse so he could keep from being seen, and had his secret service staff wear golf gear and play in the groups either side of his so that they could go incognito, although, Fay noted, they were such poor players that they stood out like “someone attending a formal dinner in a sport shirt”.

It was only when wild rumours started swirling among the press pack about exactly what else the president might be up to when he kept disappearing in the afternoons that Kennedy’s men finally admitted he was sneaking over to the Burning Tree club to fit in nine holes.

Trump, though, is pretty unashamed about where the game fits in his list of priorities. Especially now when, as Jimmy Kimmel joked, phase one of his recovery plan seems to be to get the golf courses open again as soon as possible.

He had the commissioner of the PGA Tour, Jay Monahan, on the phone last weekend, in a conference call with other administrators, talking about how they would get sport up and running. “Our sport lends itself more so than any other sport to social distancing,” Monahan told CNN afterwards. “And I think that’s what puts us in a spot where we feel like we can return at that point in time. Golf is inherently unique in that regard.”

Monahan’s argument would have been stronger if he had said that his is one of few sports that might be improved by physical distancing, given some of the sorts who hang around the clubhouses. As it is, whether or not golf really “lends itself” to physical distancing or not depends on whether they will be able to find a way to protect the 800 or so officials and support staff it takes to run a PGA Tour event.

There have been reports that the PGA Tour has ordered as many as a million testing kits. Which speaks to the game’s real advantage, its privilege, most obvious in Trump’s offer “to provide a lot of help and resources”. So anyone flying back and forth for the tournaments will be doing it under the auspices of “essential travel”.

God forbid that anyone should have to wait another couple of months before swinging a club in public. – Guardian