Options running out for staging Irish Open in 2020 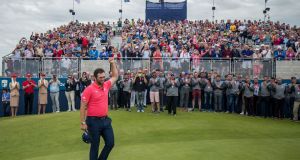 Will a postponement turn into a cancellation for this year’s Dubai Duty Free Irish Open? With no date on the PGA European Tour for any potential restart, allied with a growing list of postponements and a tight squeeze on any possible free weeks later in the season, there is the growing prospect that this year’s Irish Open won’t be played.

Originally pencilled into the calendar for Mount Juliet on May 28th-31st, the Irish Open was one of the earlier casualties of the Covid-19 pandemic but postponed at the time with the hope that it could be reinstalled into the itinerary at a later date.

Such a possibility is appearing increasingly remote however as the European Tour – with international borders adding to the problem on when or how the schedule is rebooted – is faced with an ever-narrowing window of opportunity to find new weeks even for those blue chip tournaments that are part of the elite Rolex Series.

While the PGA Tour is still contemplating a mid-June restart, initially behind closed doors, the European Tour has a more complicated pathway given that so many of its top players will be playing stateside later in the season and also with the border factor.

In trying to identify possible windows after the resumption, at a time yet to be determined, the simple fact of the matter is that Irish Government restrictions on massed gatherings over 5,000 already mean that any possibility of an Irish Open this year is kicked at least into September which, as of now, is a month that is packed with conclusion of the FedEx Cup playoffs, the US Open and Ryder Cup among the schedule events.

Moving on into October on the European Tour, the Alfred Dunhill Links championship kick-starts the month while the Italian Open – another Rolex event – follows immediately afterwards.

The Irish Open and the Scottish Open are among the two Rolex events which would have to be prioritised ahead of so-called regular events (among them the China Open, the Andalucia Masters and the Made in Denmark) which have also been “postponed” rather than “cancelled”, a fate that has befallen the Scandinavian Masters, the BMW International Open and the French Open which have all gone for this year. Of course the biggest casualty of all has been the British Open, with the R&A deciding to cancel the tournament until 2021.

So, what dates could potentially see an Irish Open go ahead? In truth, the options are few and far between unless the European Tour is willing to, say, cut the Spanish Open (October 15th-18th) from its slot and gamble on some decent weather, with a possibility of a slightly smaller field to account for the reduced daylight, in that week?

Otherwise, and increasingly, it would seem likely that the Irish Open will not be able to go ahead, with the prospect that it will instead return to Mount Juliet with Portstewart (mooted to be the likely venue for 2021, but unconfirmed as yet) playing host a year later in 2022.

The next scheduled event on the European Tour is the British Masters, which is due to take place at Close House on July 30th-August 2nd.

On the other side of the Atlantic, the PGA Tour is aiming to restart with no spectators at the Colonial in Texas, with the Charles Schwab. However, Charley Hoffman, the PGA Tour’s chairman of the player advisory committee, has gone on record as saying that June 11th timeframe is not set in stone. “If we have to push the restart back we push it back, we’re not going to go out there until it’s safe to play golf safe to travel and safe for our families, our caddies.

“We are not going to try to push it out there just to try to put a product on TV. But as soon as everyone feels safe, we’re going to be out there playing.”

Eamonn Ryan’s legacy teaches us that things do change and get better 05:00
Garda coastal watch plan launched, and RNLI veteran retires 00:00
Solskjær ‘disappointed’ with draw as Klopp defends misfiring Liverpool 22:36
Anfield stalemate shows dire need to get the freshness back 22:57
American yacht takes flight and capsizes in Challenger Series race 22:30
Here is your handy guide to sport on television this week