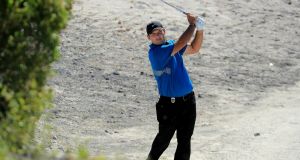 Patrick Reed plays his second shot on the third hole during the first round of the 2019 Hero World Challenge in Nassau, Bahamas. Photograph: David Cannon/Getty Images

Brooks Koepka has waded firmly into the Patrick Reed rules controversy, insisting his Ryder Cup team-mate was “building sandcastles” during an infamous episode in the Bahamas in December.

Reed was penalised two strokes by the PGA Tour after clipping sand in a waste area during practice swings in the third round of the Hero World Challenge. Reed has remained adamant he did nothing wrong intentionally. Yet the situation pursued the former Masters winner to the following week’s President’s Cup, where Reed was constantly heckled by spectators. He was forced to sit out the final round of a US victory over the International team after his caddie and brother-in-law snapped back at one fan at Royal Melbourne.

Now Koepka, in an interview with the PGA Tour’s SiriusXM channel, has offered a forthright opinion of his own. “I don’t know what he was doing, building sandcastles in the sand,” said the four-time Major winner. “But you know where your club is. I took three months off and I can promise you I know if I touch sand. If you look at the video, obviously he grazes the sand twice and then he still chops down on it.”

Koepka isn’t in the field for this week’s World Golf Championship in Mexico City, but given Reed is, any response will be fascinating. In the Bahamas Reed answered “of course” when asked whether or not he believes he receives a raw deal in respect of reputation. “After seeing the incident on camera and seeing sand move, obviously it’s a penalty,” Reed said. “So at that point I had to accept it and move on.”

Koepka added he had witnessed rule breaches by fellow competitors in the past and wasn’t of a mind to raise the issue, an approach that would change should likewise happen again. “I haven’t opened my mouth,” said the 29-year-old. “But now if I saw it, just because of where I’m at in the game, the stature that I have, I would definitely say something.”

In what may well have implications for Tiger Woods as he looks to earn a spot on the US team, Koepka cited an element of indifference towards Olympic participation. Koepka would be viewed as a shoo-in to appear in Tokyo this summer but suggested his priorities are elsewhere.

“I don’t know yet what I’m going to do,” said Koepka. “I think it would be cool to be an Olympian but at the same time it’s not something I’ve grown up wanting to be.” – Guardian

Entire Newcastle squad to self-isolate amid Covid-19 outbreak 07:35
Comfortable wins for Munster and Ulster; Full panels can now attend GAA matches 07:24
Gerry Thornley: Maybe the new Ireland could do with a little of the old detail 06:00
Kevin McStay: Beautiful chaos of All-Ireland to end in a Dublin-Mayo final 07:57
David Nucifora confident IRFU will keep majority of players they want 05:30
Here is your handy guide to sport on television this week