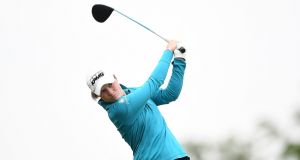 An extended stay in Australia is on the cards for Leona Maguire, which - given the start to her stint Down Under with a top-five finish in the ISPS Handa Vic Open - won’t come as any hardship.

With the LPGA Tour forced to cancel its planned Asian swing - with tournaments in Thailand next week and Singapore joining the Blue Bay event in China on the cancelation list due to concerns about the Coronavirus - Maguire can at least seek to maintain the momentum in the weeks ahead: she plays in this week’s Australian Open and also plans to play in next week’s Ladies European Tour sanctioned event, the Australian Classic in Bonville.

This week’s ISPS Handa Australian Open is another LPGA Tour sanctioned tournament, and Maguire’s strong start in her rookie season has seen the 25-year-old Co Cavan golfer move to 16th on the updated LPGA Tour order of merit. For sure it is only in its early stages, but, with the loss of those three tournaments in Asia from the schedule, getting valuable points on the board so quickly is important.

Maguire and Stephanie Meadow, who moved from 44th to 30th on the order of merit, are both in the field at Royal Adelaide for the Australian Open. With the LPGA cancelling the three scheduled tournaments in Asia, it means there won’t be another event on that circuit until the Volvik Founders Cup in Arizona in late-March.

In confirming the decision to cancel all three events in Asia, the LPGA - in a statement - explained: “It is always a difficult decision to cancel events and the LPGA greatly appreciates the understanding and all the efforts made by our title sponsors (Honda and HSBC) . . . the health and safety of our players, fans and everyone working at the event is always our highest priority. While we are disappointed that these tournaments will not take place this season, we look forward to returning to Asia soon.”

Once upon a time, the Dimension Data Pro-Am featured on the main European Tour; these days, it is part of the South African swing on the Challenge Tour . . . but, given that the next tournament on that secondary circuit doesn’t take place until May, this week’s tour stop at Fancourt is an important opportunity for players to rake up some early order of merit points.

Gavin Moynihan, Robin Dawson and Niall Kearney are all in the field for the tournament at the famed Fancourt venue, where Sweden’s Anton Karlsson, winner of the Cape Town Open last week, will aim to secure back-to-back titles.

The three-week South African swing has at least provided some tournament play for players, as the next event on the schedule is a long ways away: the Prague Golf Challenge in the Czech capital doesn’t take place until May 7th-10th!

85,000 - Former world number one So Yeon Ryu donated half of her prizemoney from her second place finish in the Vic Open - which equated to Aus$85,000 - to the bushfire relief effort in Australia and has promised to do the same with whatever prizemoney she earns at this week’s Australian Open. The South Korean explained of her gesture: “As soon as I heard about what happened in Australia, I thought, ‘how can I help?’ I just thought maybe I’d donate half of what I earn . . . I think (climate change( is not only a problem for Australia, I think it’s a whole-world thing.”

“These last couple of weeks have really given me a lot of motivation and momentum to continue what I’ve been doing. It’s disappointing certainly to have not won but I got outplayed” - Pebble Beach specialist Phil Mickelson on coming up short in his head to head with Nick Taylor. Mickelson’s third place finish in Pebble Beach on the back of his third place finish in Saudi Arabia jumped Mickelson up to 55th in the world rankings, but still outside the top-50 who qualify for the WGC-Mexico Championship later this month. He has one last chance to break into that number at this week’s Genesis Invitational in Los Angeles.

Great effort today @leona_maguire racing up the leaderboard @VicOpenGolf on another tough windy blustery day sand, dust and flies #soclose fantastic concentration to hold form on final day - None other than Sonia O’Sullivan giving her first-hand view on Leona Maguire’s play at the Vic Open.

Congrats on a great week @leona_maguire - Paul Dunne, working his way back to fitness following surgery on his wrist, tips his cap to Leona on her top-five finish Down Under.

Not exactly breaking news, but I’m really looking forward to playing this year’s #DDFIrishOpen as the Open Champion. @Graeme_McDowell in charge of hosting a #RolexSeries event at the stunning @GolfMountJuliet Going to be some week! - Shane Lowry confirming he’ll be there (just for the record!).

A - On reaching his ball in a greenside bunker, Player A finds it buried at the bottom of a steep front. He decides to take unplayable ball relief outside the bunker for a penalty of two strokes under Rule 19.3b (back on line relief). Before dropping a ball using the back on the line relief procedure outside the bunker, the player smooths footprints in the bunker on the line of play. Is he subject to a further penalty for such an action.

B - No. Rule 12.2b(3) applies in such a situation and no additional penalty is incurred. Under this relevant rule, a player may smooth sand in a bunker to care for the course without penalty.