Out of Bounds: all this talk of Premier Golf League stinks 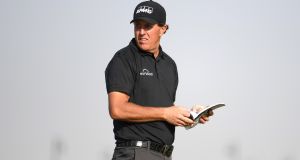 Premier Golf League? Phil Mickelson has admitted to being “intrigued” by the prospect of smaller-field tournaments with big purses. Photograph: Getty Images

The smell of money is in the air and, quite frankly, it stinks. All this talk of the so-called Premier Golf League has grown from whispers on the rumour mill into something more tangible, yet the fact that it hasn’t been smashed out of orbit with a big-headed driver by the world’s leading players is more than a little disconcerting.

Phil Mickelson, for one, has admitted to being “intrigued” by the prospect of smaller-field tournaments with big purses and others have listened and digested the grains of information that, apparently confidentially, have been put their way.

The bottom line of it is that filthy lucre is at the core, but, for heaven’s sake, those greenbacks are already there aplenty on the PGA Tour and indeed the European Tour and where the two combine, for the WGCs and the Majors, the financial incentives are mind-blowing.

Let’s be clear, this is just about the men. In contrast, women professionals are playing in a different game when it comes to money . . . and the point has been brilliantly made by Ladies European Tour player Meghan MacLaren in her latest blog posting, which eloquently (but frighteningly too) highlights a social media backlash whenever she makes public statements about gender equality.

In her short time on tour, MacLaren - remember she also made the stance not to play in the upcoming LET tournament in Saudi Arabia on moral grounds due to the country’s record on human rights - has been an excellent advocate in advancing the causes of her fellow women professionals and highlighting the significant discrepancy in purses for men’s tournaments and those at women’s events.

Here’s a snapshot of some of the replies MacLaren received to such utterings over the past year and which she has kept in a photo album on her phone: “literally nobody watches women’s golf and nobody cares”; or, “nobody wants to watch it and it’s shite love”.

Why has she kept such comments? MacLaren makes the point: “I keep it there to remind myself how far there still is to go.”

The fact of the matter is that women professionals play for a tiny percentage of what is on offer to the men, and there are many who will make the old economic argument of supply and demand and all of that. But it is not that simple, and it is time that more of the men demonstrated greater moral fibre of their own and appreciate just how good they have it instead of eyeing up potential filthy lucre at the expense of their peers . . . and perhaps instead make a stance on behalf of tour professionals who are women and ask that they get some more of the financial pie from the corporate world.

The PGA Tour and the European Tour are right to be firm with their card-carrying members when it comes to the threat of the Premier Golf League or whatever name it wants to go by. But it shouldn’t have come to the issuing of such threats, the players should be man enough to brush away the advances, take a look at the women, and realise there are better causes to put their minds to.