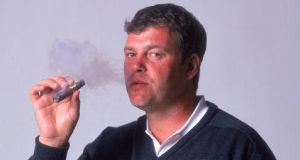 Lest we forget, Darren Clarke was the man who breathed life into what were the fledgling World Golf Championships; he was the one who had the temerity to usurp Tiger Woods at a time when the chosen one appeared invincible, and that act of defiance - performed almost exactly two decades ago in what was then the WGC-Andersen Consulting World Match Play - by the Northern Irishman made the whole concept of the WGCs worthwhile.

Remember, the WGCs had only come into being a year earlier - in 1999 - and, as the new millennium came upon us, Woods was already the dominant world number one. In 2000, he would win three of the four Majors along with six other PGA Tour titles but in that opening WGC championship of that year he had to accept second best to a player who cultivated the image of a cigar-smoking, pint-swilling golfer who shied away from the notion (at that time) of ever visiting a gym.

In what was only the second staging of the tournament, Clarke - who’d missed the cut by a country mile in the LA Open at Riviera the previous week and was taken out by his own manager Chubby Chandler in a practice round - took out Paul Azinger, Mark O’Meara, Thomas Bjorn, Hal Sutton, David Duval and Woods in turn to claim the title. Clarke’s 4 and 3 win over Woods was, in truth, the real showstopper.

“Darren, to be honest, just flat outplayed me,” Woods would confess when cast into the unlikely role of vanquished after their head-to-head.

What that match did, however, was to give the WGCs a status that elevated it out of the regular tournaments on the PGA and European Tours, to that rung below the four Majors. Over time, the WGCs became a money-making machine for Woods who, over his career, won 18 of them (so far): to put that dominance into perspective, the next best on the all-time winning list is Dustin Johnson (with six), while Rory McIlroy, Phil Mickelson and Geoff Ogilvy are tied in third with three wins apiece.

As it happened, Clarke too would become a multiple WGC champion when he added the WGC-Bridgestone Invitational in 2003 to his CV.

Without ever threatening the four Majors - the Masters, the US PGA, the US Open and the British Open - the WGCs have nonetheless served the purpose of providing a status that allowed the tournaments to separate from the crowd.

And, of them all, this week’s WGC-Mexico Championship (which has had a number of different names) has proven the most global: it started life in Valderrama in Spain, was twice played at Mount Juliet in Ireland, and also featured host venues in England and the United States before finding its latest home in Mexico.