‘It’s a tough track and I’m still learning it as I go, but I loved what I saw and I’m excited’ 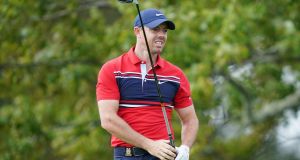 Rory McIlroy practicing ahead of the US Open Championship at the Winged Foot Golf Club in Mamaroneck, New York. Photograph: AP

For all of its fearsome reputation, Rory McIlroy has quite taken to Winged Foot, the parkland classic in Mamaroneck, New York, where the 31-year-old Northern Irish man will aim to end a six-year winless drought in the Majors as this latest edition of the US Open takes place behind closed doors.

McIlroy isn’t one for taking too much notice of the rumour mill, and he has let his eyes do the decision making in terms of how the famed AW Tillinghast design will test the field this week.

“I think it’s very, very fair. When I played Oakmont for the first time, my initial reaction was, ‘this place is impossible’. But this course doesn’t feel quite as [intimidating], it gives you a little more chances, more playable . . . it’s a tough track and I’m still learning it as I go, but I loved what I saw and I’m excited to get going.”

Without a win in a Major since his US PGA win in 2014, and without a win anywhere since capturing the WGC-Champions tournament in Shanghai last November, McIlroy played the course for the first time on Monday, 18 holes, and limited himself to just nine on Tuesday. He has been grouped with Adam Scott and Justin Rose for the first two rounds.

And, like a chess player forced to anticipate moves in advance, McIlroy has liked what he has seen.

“I thought I was going to have to hit driver, 5-iron into every Par 4 and it’s not quite like that. There’s still places where precision beats power, and that’s been the case here at US Opens in the past. There’s not as many drivers off tees as I thought there would be, which is good. You’ve got to put your ball into position and . . . [get] it on to the right level of these greens, leaving it below the hole, giving yourself decent putts.

“I think there’s a lot of thinking ahead on this golf course, and okay, ‘where can I leave this next shot that I have the most routine chip shot or second putt or whatever’. So there’s a lot of just thinking one step ahead.”

McIlroy, who returned home to Florida following the Tour Championship for the week to spend family time with wife Erica and newly born daughter Poppy, left on Sunday to make the journey to New York. But he suggested that new fatherhood would provide a different perspective as he goes about focusing on his golf, starting this week.

“It’s a Major championship and I’ve grown up my whole life dreaming of winning these tournaments and that is not going to change. But if it doesn’t quite happen, I can live with that and go home and be very happy and leave what’s happened at the golf course at the golf course. I think that’s maybe something that I haven’t done so well in the past . . . I haven’t left my job at the office basically, I’ve brought it home with me and I’ve let it affect my mood. I think having that little bit more perspective definitely helps.”

McIlroy, obviously with other things on his mind when the PGA Tour resumed in July as he prepared for the birth of his daughter, has been one of those players – with Tiger Woods also falling into the category – who craved the energy provided by spectators at tournaments. On that front, though, McIlroy is convinced it is less of a factor.

“I’m used to it now. I think at the start it was different. I’ve been pretty vocal on the fact that it took me a while to adjust to not having fans. But it’s sort of become the norm nowadays.”