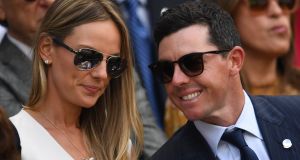 Rory McIlroy admits it will be the “icing on the cake” if he can retain his Tour Championship title just days after becoming a father for the first time.

McIlroy revealed on social media that his wife Erica had given birth to Poppy Kennedy McIlroy on Monday and “she is the absolute love of our lives”.

The 31-year-old said that mother and baby are “doing great” and also thanked staff at Jupiter Medical Center in Florida for their “amazing care”.

McIlroy had said he was willing to withdraw from last week’s BMW Championship in Chicago or the upcoming Tour Championship if Erica went into labour, despite the €12.5 million first prize on offer at East Lake.

But the fortuitous timing of Poppy’s arrival meant that McIlroy could make a somewhat reluctant late arrival in Atlanta where – under the controversial handicap system – he will begin the event on three under par, seven shots behind FedEx Cup leader Dustin Johnson.

“It’s amazing,” McIlroy told reporters. “You see other people having babies and you’ll say congratulations and you’re happy for them, but you don’t really know how it feels.

“You feel like you get to know your baby while she’s still in her mother’s belly, but to go from not having met this person to having unconditional love for them from one minute to the next is just . . . there’s nothing like it in the world.

“It’s nice in the hospital. You’ve got so much help and all the nurses are around and they did a phenomenal job. And then you’re handed your child and they’re like, ‘See you later’, and they don’t come with an instruction manual.

Poppy Kennedy McIlroy, born August 31st, 12:15pm. She is the absolute love of our lives. Mother and baby are doing great. Massive thank you to all the staff at Jupiter Medical Center and Dr Sasha Melendy for their amazing care ❤️❤️❤️ pic.twitter.com/IwFeGf8rod

“Thankfully Erica has her mom and sister with her at the minute, so she’s got plenty of help and I feel a little better leaving and coming here to play this week.

“It’s been hard to think about golf the last few days just because I’ve been so focused on making sure that everything is okay at home. But maybe this is what I needed, just for everything to happen and go well.

“I haven’t played my best since coming back out since sort of post-Covid. But maybe things just will fall into place. It’s already been the best week of my life, and this would obviously just be the icing on the cake.”

Much has been made of the so-called “nappy factor” in golf, whereby new fathers experience an unusually high rate of success, and McIlroy will be hoping that rings true not only this week, but also with the US Open and Masters still to play in 2020.

“I think if you look at fathers in all different sports, golf, tennis, it’s not a new lease of life, but it’s a different perspective,” he added.

“The trials and tribulations of what goes on out on the golf course don’t really seem to matter that much, so you can sort of let it just slide off you a little bit more and not be as reactive to your mistakes and know that this is important and it’s your career, but at the end of the day you get to go home to your family, which is the most important thing.”

The course: East Lake Golf Club, established in 1904, is the oldest club in the Atlanta city limits. An historic course, the home course of the legendary Bobby Jones, it has been home to the Tour Championship, the conclusion of the megabucks FedEx Cup, since 2004. Originally designed by Tom Bendelow, it was redesigned by Donald Ross in 1913 and, then, after suffering a period of neglect in the ’70s and ’80s, Robert Trent Jones was commissioned in the early-90s to restore Ross’s original work. The par 70 measures 7,346 yards and features many water hazards, among them the Par-3 15th which is considered the signature hole.

The field: After their heavyweight encounter at the BMW, world number one Dustin Johnson and world number two Jon Rahm renew rivalry in the PGA Tour’s season finale. Only Brooks Koepka and Adam Scott from the world’s top-10 are absent. Technically, all 30 players in the field have the chance to scoop the €12.5 million ($15 million) jackpot to whoever lifts the title, with the tournament finishing on Monday. The staggered starting scores means Johnson starts off with a two-stroke lead over Rahm, and 10 strokes better off than the quintet of players (Viktor Hovland, Cameron Smith, Mackenzie Hughes, Cameron Champ and Billy Horschel) at the bottom.

Quote-Unquote: “I would say that this golf course is a challenge all throughout. There’s not one category I would say that stands out. Every part of your game needs to be solid.” – Jon Rahm.

Irish in the field: Rory McIlroy is the only Irish player to make it to East Lake, and – with new baby Poppy Kennedy McIlroy born – the player intends to play in the championship after his daughter timed her arrival into the world perfectly. McIlroy is paired with Brendon Todd (tee-time 6.30pm Irish time) for the first round.

Betting: Not surprisingly given he has a head start on the rest of the field, Dustin Johnson is a short priced 15/8 leader in the market with Jon Rahm at 11/4. As McIlroy proved in coming from five strokes behind at the start to win by four, so the 18/1 about PGA champion Collin Morikawa might tempt on this occasion.

On TV: Live on Sky Sports Golf from 5pm.