Michael Hoey not afraid to do the heavy lifting when required 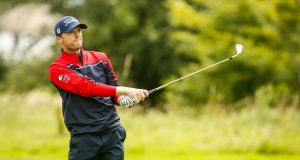 Needs must in a lockdown, and in five-time European Tour winner Michael Hoey’s case, the enforced restrictions and lack of tournament play earlier this season necessitated a rather dramatic career change: instead of focusing on yardages, green speeds and slopes, the 41-year-old Northern Irishman got a heavy-lifting job with global couriers DHL.

Hoey – who is back playing competitive golf again, and looking forward to teeing-up in the Northern Ireland Open, supported by the R&A, at Galgorm Castle on the Challenge Tour – recalled of his temporary change of career when tournament play came to a halt back in February.

“A recruitment girl called me up. ‘Do you want to start tonight?’ I thought, ‘I won’t be tough enough for this’, but I managed to stick at it for three months, lifting off a belt all night, really heavy DIY stuff, so it was certainly character building,” said Hoey, who was not alone in seeking alternative work.

As he put it, “I was speaking to [other] guys and they’ve had jobs, believe it or not, in the real world. I entered it myself. You can’t make any money [as a player with no tournaments], you’re losing sponsors because small businesses are struggling and it is [so] uncertain . . . I felt incredibly fit afterwards and I was looking forward to playing a lot of golf. but some of the tournaments got cancelled. I came out fit and hungry and didn’t have much to play.”

What Hoey did manage, though, was to keep his game in with practice rounds, many of them at Galgorm Castle where he is attached a touring ambassador, although the Covid-19 restrictions in play this week at the Co Antrim venue could actually give him a bit of an edge.

With the Challenge Tour creating a bubble, and with no caddies allowed for players on site, Hoey conceded: “It’s going to be an advantage potentially for someone like me who is used to getting the numbers themselves. Some of the guys aren’t used to pacing off and don’t know the course that well. It will be a tough slog [carting the bag around], but there’s a lot worse things we could be doing!”

Hoey, whose five European Tour wins included the 2011 Alfred Dunhill Links Championship when he held Rory McIlroy at bay, has also won four times on the Challenge Tour, and is happy to be back playing again.

“You have two families, one at home and one away, and all the people you haven’t seen for six or seven months, it’s nice to see them again . . . .everyone wants to get back to normal for 2021, but I think it isn’t going to be normal at all and that’s the unfortunate thing. Hopefully, it will be a bit more positive.”

So, for now, Hoey is at least on familiar home terrain, even if inside the Challenge Tour bubble.

1 Gordon D'Arcy: Ireland must go after victory by frightening France into mistakes
2 Robbie Henshaw likely to be the only Irish change for France finale
3 Dave Heffernan delighted to have banished bad memory of his first cap
4 Seán Moran: Will a silent, empty Hill help to loosen Dublin’s grip on Sam?
5 Cork City expected to approve €1 takeover by Preston owner
Real news has value SUBSCRIBE