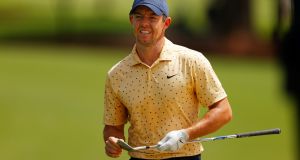 Rory McIlroy during the first round of the Tour Championship at East Lake. Photograph: Getty Images

Rory McIlroy said playing without expectations following the birth of his first child had helped him rediscover some of his best form as he shot a six-under 64 in the opening round of the season-ending Tour Championship in Atlanta on Friday.

The Northern Irishman, who began the day in 12th at three under, got his title defence off to a flying start just five days after his daughter Poppy was born and said that he was surprised by how quickly he found his groove.

“Yeah, a little bit. You know, it just shows you golf is such a mental game and if you come in with low expectations, that’s always how I’ve played well,” McIlroy told reporters.

“Whether I don’t feel like my game is in a good place or I’m not the favourite coming into a tournament, I feel that’s when I usually play my best and I can play with a bit of freedom, and that’s what I did today.”

The world’s leading two players Dustin Johnson and Jon Rahm were tied atop the leaderboard at 13-under par after the first round. McIlroy was fourth.

The 31-year-old, who previously acknowledged that he was distracted over the last few weeks, said he constantly kept thinking of his daughter during the first round.

“It’s like every three hours she’s supposed to be fed, so I’m like, okay, there’s a feeding coming up,” McIlroy added.

“But it’s natural, that in between shots you think about other things, and obviously my mind has been very much on what’s going on at home.

“But it’s nice to have this little four or five hours to myself, concentrate on my game and get into this stuff. I played well today, as good as I have in a long time, and that was very encouraging.”

As top seed in the season-long points standings, Johnson started at 10-under par with a two-shot lead thanks to the staggered scoring system and mixed five birdies with two bogeys to card a three-under 67 at East Lake.

The American’s four-and-a-half foot birdie putt on the par-5 18th would have given him the outright lead but the ball lipped out and he was forced to settle for par.

The long-hitting Johnson, runner-up to Rahm last weekend after winning the playoff opener the previous week, is competing in the Tour Championship for a 12th consecutive season, the longest active streak on the PGA Tour.

Rahm, who was paired with Johnson, nearly holed out from the bunker on 18 but his ball also found the lip of the cup and he was forced to settle for par to cap a round of five-under 65.

Former FedExCup champion Justin Thomas, who started in third place three shots back, got up and down for birdie on 18 to shoot a four-under 66, two shots off the lead at 11 under.

1 under — Scottie Scheffler, Viktor Hovland (Nor)

Waterford’s Pauric Mahony out for the season 21:26
Hugo Keenan could start in changed Ireland team against Italy 21:04
Guardiola takes blame for City’s European failings 21:12
Kelly and Lynch ready for Thurles showdown as if it’s their last 21:29
Wijnaldum attacks ‘stupid’ Pickford tackle on van Dijk 20:10
Here is your handy guide to sport on television this week