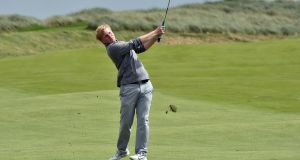 The powerful 22-year-old Naas star has no compunction about pulling out the driver at every opportunity, even if it means aiming 60 yards away from his intended target.

But he is also loving the challenge of what leading qualifier and title favourite Ronan Mullarney calls “ground hurling” as the winds continue to battle the fabled old course.

“It’s how many good shots you can hit,” Brazill said after following a two-hole win over Oughterard’s Devin Morley with a hard-fought 4&2 victory over Kinsale’s Cathal Butler. “It’s about how many fun shots you can play. Imagination plays a huge part here

“I hit a seven iron from 110 yards today whereas that’s usually a sand wedge. You have to keep it as close to the ground as possible.”

Brazill is on target to top the Bridgestone Order of Merit which will award caps to the top three point winners following next weekend’s final counting Mullingar Scratch Trophy.

He faces a tough semi-final showdown with 2018 Munster Strokeplay winner Alan Fahy from Dun Laoghaire, who beat the up and coming Dundalk star Eoin Murphy 3&1 by slowing down his tempo to deal with the conditions.

But it will be equally tough for Mullarney against 18-year-old Elm Park talent Charlie Denvir in the other semi-final.

One down with one to play, the former Boys international almost drove the downwind 18th and won it with a conceded birdie three before breaking Ballybunion hearts by drilling home a 12 footer for another birdie at the 19th to beat the home hope Edward Stack and make the last four.

“A few roars out there were nearly like it was an All Ireland football final for Kerry, but I was focused on my own game,” Denvir said of his win over the 30-year-old local man. “I enjoyed the challenge.”

Stack had his chances but after taking a four iron instead of a five on the 18th tee, he drove into the waste area they call the Sahara, came up short in two and then saw his chip peel left and down into a swale before bowing out to Denvir’s textbook birdie three on the 19th.

“I am disappointed but also thrilled to have gone so far,” Stack said. “I have been looking forward to this since it was announced a few years ago. Even to get into the tournament was a thrill. I am disappointed to lose but he’s a great player and a fantastic ball striker. One for the future.”

Denvir cruised to a wire-to-wire, eight-stroke win in the Connacht Boys at Galway Bay two years ago and could prove a handful for the relentless Mullarney, who went beyond the 15th for the first time all week when Co Sligo’s Sean Flanagan took him to the last in a nip-and-tuck affair.

“I’ll be the underdog anyway,” Denvir said. “If I get something going with the putter again, I might be able to cause a bit of an upset.”

The Galway man won the 16th with a two-putt birdie and while he missed a four footer for the match at the 17th, he closed out a two-holes win with a magical chip to three feet at the 18th.

While he does not believe that the tough conditions favour anyone, he knows he has answers to the questions posed by Ballybunion in the wind.

“It’s brilliant,” said Mullarney, who made his international debut last year but still yearns for that maiden championship win.

“I love the course. It was completely different to what I expected but in a good way. It is quirky and punishing. But it is good. You are not going to get away with bad shots.”

Laois stay safe with King to the fore 21:01
Dan Martin climbs to second in Portugal 20:39
Jesus spares Aguero’s blushes at Leicester 19:43
Jack O’Connor snatches the points for Wexford 19:42
French new wave stay on course for Grand Slam 19:19
Here is your handy guide to sport on television this week