Jonathan Caldwell makes it into final shootout in Cyprus 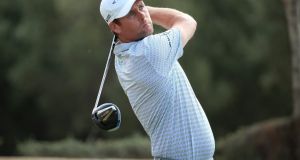 Jonathan Caldwell tees off on the fourth hole during the third round of the Aphrodite Hills Cyprus Showdown at Aphrodite Hills Resort in Paphos, Cyprus. Photo: Andrew Redington/Getty Images

Jonathan Caldwell fired a third round 67 to make it into the final round of the unique Cyprus Showdown.

Only the top 16 and ties after round three advanced to the final 18 holes, with all scores then reset to par, and the trophy and the €200,000 first prize will go to the player who can shoot the lowest round on Sunday under the innovative format.

Co Down native Caldwell birdied the first, third, fifth and sixth to get off to a flying start before a bogey at the seventh. However, he made further birdies at the 10th and 11th and could afford a bogey at the 14th to make it into the final round with a shot to spare.

Caldwell has been in good form recently with a tied-fifth finish at the Italian Open and a tie for seventh at the Scottish Championship and the 36-year-old will be hoping to improve on that on Sunday when it is all to play for.

England’s Matthew Jordan carded the joint lowest round of the day while countryman Richard Bland was made to wait until the 18th hole as both men made it through to the final round.

Jordan fired a 64 to finish seven under and ease his way into the final day alongside American Johannes Veerman but Bland needed a par on the last to make sure of his place.

Things looked bleak for the 47-year-old when playing partner Gavin Green hit the green in two while Bland was back in the fairway, with an eagle on the par five from the Malaysian potentially sending Bland home.

But the veteran made his par and, with Green getting down in two for a birdie, both men progressed at three under.

“Tomorrow, if it comes off it comes off,” Bland, who is seeking a first European Tour win in his 466th event, told europeantour.com. “If it doesn’t it has still been a pretty good week.

“Hopefully I can go out and get some birdies early like I did today and try and keep the momentum going.”

Jordan is also seeking a first win but the 24-year-old has just 27 appearances under his belt.

“You just have to try get off to a good start tomorrow,” he said. “I think if you’re struggling through nine you’re going to make it tough for yourself, so I’m going to concentrate on trying to start well.

Welsh Ryder Cup hero Jamie Donaldson fired a 65 after finishing third over this course last week at the Cyprus Open, with nine British players among the 19 through to the final day.

The following players did not make the final round cut: